“It’s really hard to pay respects to an ancestor if you don’t know where they are,” —Linda Fitzgerald, genealogist

By NICOLE TSONG
The Seattle Times 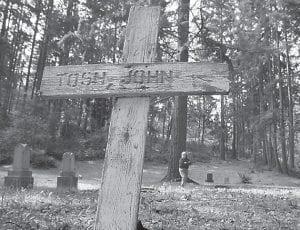 Linda Fitzgerald, with the Seattle Genealogical Society, checks one of two known and marked African-American coal-miner graves at Newcastle Historic Coal Miner’s Cemetery in Newcastle, Wash. The cemetery is the kind of place familiar to a few local kids and invisible to most everyone else. It’s tucked up on a hill and secured by a locked gate. The closest most visitors get is a sign that says “King County Historical Site.” (AP Photo/The Seattle Times, Alan Berner)

The Newcastle Historic Coal Miner’s Cemetery is the kind of place familiar to a few local kids and invisible to most everyone else. It’s tucked up on a hill and secured by a locked gate. The closest most visitors get is a sign that says “King County Historical Site.”

But a couple of years ago, some curious genealogists from the Seattle Genealogical Society were drawn to the 2-acre site where tall trees shade crumbling headstones.

They don’t have ancestors of their own buried there, but they wanted to document the cemetery, which hadn’t been mapped since the 1960s.

They have since put together a book documenting every grave. They gave it to the city of Newcastle and hope to post it online later this year on the genealogical society’s website. 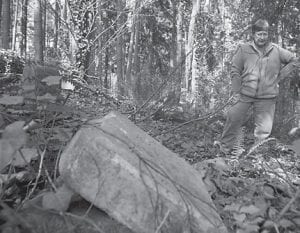 Ginny Sommarstrom, president of the Seattle Genealogical Society, surveys grave sites in the Newcastle Historic Coal Miner’s Cemetery in Newcastles, Wash. Genealogists have put together a book documenting every grave in the cemetery, which hasn’t been mapped since the 1960s. (AP Photo/The Seattle Times, Alan Berner)

In the pages of the book, they also detail a remarkable discovery — the graves of two African-American miners.

During their exploration of the cemetery, the genealogists walked around with a map from the 1960s, gently brushed dirt off worn headstones and noted polished, modern ones likely added by local families.

They examined intact headstones and tried to figure out who was buried in which plot.

They learned that the first person was buried in 1879, the most recent a century later in 1979.

The graves off er a snapshot into Seattle’s history at the turn of the century when mining, not technology, dominated the Eastside.

But once those miners died, the rules changed.

“Genealogists know how society functioned in diff erent eras,” Fitzgerald said. “You have to think about what was going on in that era. That’s what led us up to see what was up in that area.”

Back then, whites were buried with whites, and blacks were usually buried in separate cemeteries, Fitzgerald said.

It is unusual to find blacks in the same graveyards as whites.

“We knew that if nonwhites were buried here, they’d be on the edges,” she said.

Ernest Milton Swanson, a lifelong Newcastle resident who has greatgrandparents buried in the cemetery, said the Newcastle Historical Society has always known about the separate graves.

Swanson, the society’s co-president, confirmed Lock and Callaway were African American. Callaway was known to have worked in the mines, Swanson said. But that knowledge wasn’t widely shared.

“It’s just a handful of us old-timers that know or have any connection,” said Swanson, 92.

Black miners arrived in Newcastle by train in the 1890s as strikebreakers, he said.

The cemetery originally was run by the fraternal Independent Order of Odd Fellows, but cemetery records are spotty, with just initials to identify some people buried there, he said.

Swanson once tried to help a family find a plot in the main cemetery, but the place where they thought the person might be buried was covered in 2 feet of Oregon grape they would have to dig up to see if any marker remained.

Swanson suspects there may be another half-dozen graves in the nonwhite section.

“They probably could find somebody up there,” he said.

“But you’d have no way of identifying who it was. That’s the sad part of it.”

Fitzgerald found Callaway in the 1900 census records, but she hasn’t been able to learn much more.

The two standing gravestones are carved and decorated, indicating Callaway and Lock probably had some status when they died.

The genealogists hope their book will help other families trying to trace their family trees.

Lock, for instance, was born in North Carolina. His descendants may not know he moved to Seattle, which was not an easy trip in that era, said Ginny Sommarstrom, president of the Seattle Genealogical Society.

“It’s real hard to pay respects to an ancestor if you don’t know where they are,” Fitzgerald said.