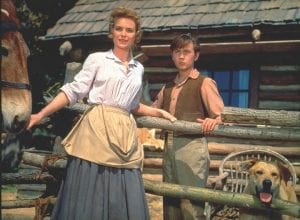 Dorothy McGuire, left, and Tommy Kirk are shown in a scene from the 1957 classic “Old Yeller.” The film is among 25 added to the National Film Registry of the Library of Congress. (Disney via AP)

Two classic Walt Disney films, 1957’s “Old Yeller” and 1959’s “Sleeping Beauty,” and a movie made partly in Letcher County — 1980’s “Coal Miner’s Daughter” — are among 25 films just added to the National Film Registry of the Library of Congress.

The films, chosen in consultation with the National Film Preservation Board and library specialists, also include Prince’s 1984 “Purple Rain,” Spike Lee’s 1986 “She’s Gotta Have It,” and The Band’s 1978 rock concert classic, “The Last Waltz.”

“Coal Miner’s Daughter,” parts of which were filmed in Blackey and Mayking, traces the exceptional life of country music legend Loretta Lynn, documenting her unlikely ascent as a child bride from Butcher Hollow, Kentucky, to superstar singer and songwriter.

Never shying away from Lynn’s professional and personal struggles, “Coal Miner’s Daughter” helped set the standard for every musical biography that has followed it. Sissy Spacek earned an Academy Award for her deeply heartfelt and true-to-life performance in the lead role. She is matched by her co-stars Tommy Lee Jones as Lynn’s husband “Doo” and Beverly D’Angelo as Lynn’s mentor, the late Patsy Cline.

Stories of boys and their dogs have long been fodder for films and books, but none has ever resonated more strongly with the public than “Old Yeller,” the 1957 adaptation of the Fred Gipson novel. Produced by Disney, the beloved film was directed by Robert Stevenson and stars Fess Parker, Dorothy McGuire and Tommy Kirk.

Few movie endings have ever proved as emotionally affecting as the conclusion of “Old Yeller.”

“Sleeping Beauty,” the story of the sleeping princess Aurora, awakened by a kiss, was transformed from the timeless fable from the original Charles Perrault fairy tale (“The Sleeping Beauty of the Wood”) and The Brothers Grimm (“Little Briar-Rose”). It was the last of classic animated fairy-tale adaptations produced by Walt Disney, whose influence suffuses the film.

Meanwhile, more films directed or co-directed by women than ever before are among those added to the Film Registry.

Among the 25 selected are Patricia Cardoso’s 2002 “Real Women Have Curves,” Gunvor Nelson’s 1969 “My Name is Oona” and the 1971 “A New Leaf,” which Elaine May wrote, directed and starred in. Also included are the 1984 documentary “Before Stonewall,” co-directed by Greta Schiller and Robert Rosenberg, and Madeline Anderson’s 1970 “I Am Somebody,” considered the first documentary on civil rights directed by a woman.

The annual list of influential films that span both genres and decades was announced last week by Librarian of Congress Carla Hayden. Among the considered films for 2019 were 6,000 nominated by the public. The biggest public vote getter was Kevin Smith’s 1994 “Clerks,” which made the final cut.

This year’s additions span a century, from the 1903 “Emigrants Landing at Ellis Island” to “Fog of War,” the 2003 documentary in which former Defense Secretary Robert McNamara re-examines his role in shaping U.S. military and foreign policy at the height of the Vietnam War.

“The National Film Registry has become an important record of American history, culture and creativity,” Hayden said in a statement.

The latest selections bring the number of films in the registry to 775, a fraction of the Library of Congress’ moving-image collection of more than 1.6 million titles.