Coal operator says he will open 7 new mines in Pike 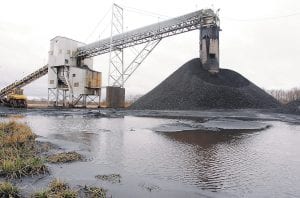 NOT EVERY REGION IS SUFFERING — While the coal industry is slumping in Central Appalachia, it is booming in the Illinois Basin, which includes western Kentucky. Shown here is Peabody Energy’s Gatewood Mine near Coulterville, Ill. A new report says that Illinois coal, once shunned for its high sulfur content, is enjoying record demand overseas. Thirteen million tons of Illinois coal was exported last yearl, a five-fold increase from the 2.5 million tons shipped out of the U.S. in 2010. (AP Photo)

A longtime coal operator plans to open seven mines in Pike County in a venture expected to create more than 250 jobs in a region where several thousand mining jobs have disappeared in recent years.

Billy C. Smith said most of the coal extracted by his High Ridge Mining operation will be shipped to China to help fuel its economy.

“We plan on mining a million tons a year,” Smith said recently.

It’s a business model that officials hope will rejuvenate the area’s slumping coal industry as they increasingly look abroad at new markets.

“The short-term economic outlook for coal seems dismal, but due to the growth taking place in Asia, coal is needed to sustain it,” said Pike County Judge-Executive Wayne T. Rutherford. He insists that makes the long-term outlook for eastern Kentucky coal “rather bright.”

“People are hurting,” Rutherford said this week. “Their quality of life has been hit like it’s never been hit before.”

The Kentucky Energy and Environmental Cabinet’s Department for Natural Resources announced recently that it has approved the transfers of five mining permits involving High Ridge Mining in February.

The employment drop has coincided with a decline in output. Production in eastern Kentucky fell to 49.4 million tons last year, the lowest level since 1965, according to the report from the state’s Department for Energy Development and Independence.

In western Kentucky’s coal region, production was up slightly last year by 2.5 percent, to 42 million tons.

Pike County had a jobless rate of 11.1 percent this past March, well above the statewide rate of 8 percent in the same month.

It’s part of a regional trend as the state’s eastern coalfields continue to be plagued by widespread joblessness. Magoffin County had the highest unemployment rate in the state at 18.3 percent in March. Leslie County was second at 17.2 percent, followed by Harlan County at 16.8 percent and Letcher County at 16.7 percent.

Smith said his company will begin hiring workers in the coming months, with plans to staff 36 miners at each of the seven deep mines he’s developing in Pike County.

Mining jobs are traditionally among the highest paying in the coalfields.

Rutherford said the region’s coal economy has survived downturns in the past and that the current slump appears to have “bottomed out.” He predicted that export markets in the emerging economies of China and India will lead the recovery.

He called Smith’s venture “the first step in the healing process” for the region’s signature industry.

However, a recent report indicated that the future isn’t so bright for a mineral that has been an economic lifeline for generations in Appalachian.

Rutherford has said the report “paints one side of the picture,” failing to recognize the export potential of the region’s coal.

The Appalachian coal business is facing higher production costs and competition from other coal basins and natural gas. High-producing mines in the Western U.S. that can mine coal at a cheaper price are putting economic pressure on Central Appalachia.

Meanwhile, U.S. utilities increasingly are switching from coal to natural gas to generate electricity. Natural gas has become cheaper as supplies grow, and it produces fewer emissions of toxic chemicals and gases that contribute to climate change.

Coal supporters point to tougher regulations being enforced by the Obama administration as a main culprit for the industry’s slump.

“This is a cycle we’ve been through for years,” Rutherford said. “But we’ve never had our own government trying to put us out of business.”

A release announcing Smith’s new mining venture in Pike County did not say how much he plans to invest in the operation. Smith, who lives in the area near Raccoon Creek, said he is putting his “heart and soul” into the venture.

Smith’s mines will be developed in the Big Creek, Johns Creek and Pond Creek areas of Pike County.

His venture is the latest upbeat signal for the mining industry in Kentucky’s largest county. Another coal operator reopened several idled mines a few months ago and called back about 200 miners, Rutherford said.

Where to apply for mine jobs

Persons interested in applying for the mining jobs that will be opening in Pike County must visit the Office of Employment and Training at 138 College Street in Pikeville.