Coal production drops in ’07, but prices are rising 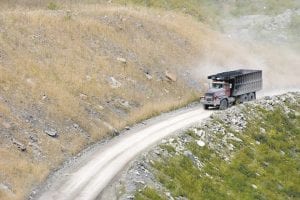 PRODUCTION DROPS IN 2007 – A tandem coal truck was photographed hauling a load of coal from a strip mine at Eolia earlier this year. While Kentucky’s coal production fell by 5.2 percent in 2007, coal operators in eastern Kentucky and elsewhere in central Appalachia were experiencing the benefits of higher coal prices at the beginning of 2008, mostly spurred by exports to power plants in Asia. (AP)

While coal production in Kentucky and other central Appalachian states dropped significantly in 2007, the region is expected to benefit in 2008 from a surging international demand for the power plant-quality coal that is mined here.

The growing demand for central Appalachian coal in Asia and other foreign markets is some unexpected good news for an industry that saw production fall 3.2 percent in the mountain region.

According to the U.S. Energy Information Administration, coal production across Appalachia dipped 3.6 percent to 364.6 million tons in 2007. Production in the U.S. dipped 1.4 percent overall.

EIA data shows year-to-date production in Kentucky, the nation’s third-largest coal producer, was down 5.2 percent compared with the same period of 2006, to 110.8 million tons as of the week ending Dec. 15. The decline was worse in neighboring Virginia, where tonnage fell 10.2 percent to 25.8 million tons.

Coal producers faced weak demand from electric utilities and stagnant prices for much of the year. More recently, however, international demand for low-sulfur coal used to generate electricity has spurred exports, particularly to Asia. EIA data shows coal exports up 11.1 percent to 14.7 million tons through June.

“The impact of Asian demand in the world market has probably increased the price of U.S. coal by $10 per ton in a three-month period,” Jim Thompson, publisher of Coal & Energy Price Report, told the Dow Jones News Service last week. “That’s a pretty amazing development.”

In Wyoming, the biggest U.S. producer, production is up 1.6 percent to 433.1 million tons.

Dow Jones reporter Michael Dalton writes that coal prices in the U.S. have surged 20 percent in the last three months, largely because of the growing appetite of China and India for coal to generate electricity. Even European utilities, fearing that coal exports from Asia will be more expensive, are looking to sign long-term contracts with U.S. companies, Dalton says.

“International demand, led by China and India, has attracted a lot of resources,” Tom Hoffman, vice president of investor relations at Pittsburgh-based Consol Energy Inc., told Dow Jones. “It’s created for the U.S. miners an opportunity to move coal into Europe that we haven’t had for a while.”

The price of low-sulfur, central Appalachian coal shipped by barge for delivery had raised to nearly $55 per ton last week, up from around $44 during August. The price of coal for delivery toward the end of 2008 is expected to approach $60 per ton, Dow Jones reported.

Some observers caution that the recent growth in demand may not last beyond 2008.

“I don’t think that is a longterm, sustainable trend,” said Deborah Rouse, manager of coal and transportation at Southern Co., a power company that is one of the country’s largest consumers of coal. “I think pricing is going to remain firm in at least the first half of 2008 and it could very well remain so throughout the year.”

Tom Hiemstra, a coal broker at the energy firm Evolution Markets, told Dow Jones the recent surge might be tempered by a lack of capacity at the terminals that take coal off railroads and load it into ships.

“On paper, when you look at the numbers, there’s opportunities,” Hiemstra said. “But right now you can’t put any more coal tons through the terminals.”