Coal reacts to Obama’s next term

Industry is hoping for break

By JAMES BRUGGERS
The Courier-Journal 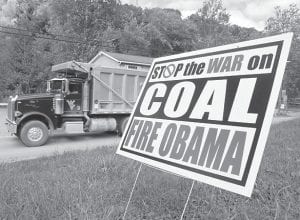 Signs like this one dotted the landscape in the coalfields of Central Appalachia leading up to last week’s Election Day standoff between Republican Mitt Romney and President Obama. (AP photo)

Despite a scathing campaign that pilloried him for waging a “war on coal,” industry and government officials say they are guardedly hopeful that President Obama is ready take a more lenient approach after winning a second term.

Kentucky, the third largest coal-producing state, produced a 61 percent to 38 percent win for Repbulican candidate Mitt Romney, who promised to loosen environmental regulations in an industry that faces new and stiff competition from cheaper natural gas.

In Pike County, coal “was the only issue and it was dominant,” said Democrat Wayne Rutherford, judge executive for Pike County, in the heart of the state’s eastern Kentucky coalfields, where Romney won 3 to 1. “There are plenty of concerns, but this is our life blood.”

On November 7, the day after Obama’s election, stocks of several coal companies fell between 9 percent and 23 percent. (For example, the stock price for Alpha Natural Resources fell from $8.84 on November 7 to $7.87 at the close of trading on November 12.)

Still, the promise of a new term and Obama’s campaign talk about “clean-coal technology” has raised optimism, albeit slightly, among some industry supporters — even as they largely continue to blame his policies for coal country’s misfortunes.

The coal economy has suffered “not simply because of low natural gases, but also the impact of a federal government that has increased costs of mining at every turn,” said Bill Bissett, president of the Kentucky Coal Association.

Yet he said, “We are hopeful that the president’s pro-coal comments from the campaign reflect a new direction for his administration.”

State Rep. Rocky Adkins, DSandy Hook and House majority floor leader, said he intends to write the president, requesting a meeting “to discuss the future of the coal industry and the need for a national energy policy in which coal must play a vital role.”

Adkins said the president’s policies on coal “have had a tremendously negative impact on Appalachia and the nation,” costing miners jobs.

Romney’s campaign alignment with the coal industry came as utilities such as LG&E and KU Energy are retiring some of their oldest coal-fired power generation stations, and replacing them with cleaner natural gas plants, in part to meet tougher new air pollution rules.

Helping to fuel the pre-election debate over coal, the utilities had also secured rate increases of up to 18 percent to pay for environmental upgrades — increases that the utilities announced after the election would not need to be as steep.

That’s because they had received timely approvals from the Kentucky Public Service Commission and the other regulatory agencies that allowed the companies to secure lower bids on the work, said Chris Whelan, spokeswoman for LG&E and KU Energy.

During Obama’s presidency, the U.S. Environmental Protection Agency also has stepped up enforcement of clean-water rules for surface mining across Appalachia and imposed a new “good neighbor” rule designed to reduce air pollution from blowing across state lines — though those two efforts have been held up by the courts.

The EPA has also promised national regulations on toxic coal-burning waste, and has proposed a rule that would likely end coal burning in new power plants — unless the plants can capture and permanently store heat-trapping carbon dioxide emissions deep underground.

“Our coal miners, especially in eastern Kentucky, continue to see layoffs, not simply because of low natural gases, but also the impact of a federal government that has increased costs of mining at every turn,” Bissett said.

For their part, EPA offi- cials have insisted they are not prosecuting any war on coal.

In August, Assistant EPA administrator Gina Mc- Carthy, who has overseen the development of controversial new regulations that are helping to force dozens of coal-fired power plants into retirement, spoke at a Louisville coal-based utility conference, assuring participants that “coal will be in play for many years to come.”

“The Clean Air Act standards recognize coal is a significant and major source of electric generation,” Mc- Carthy said. “We don’t believe our rules do anything to change that.”

“It is likely that had the Romney campaign been successful, these efforts to require that the extraction and combustion of coal better account for off-site pollution of air and water, would have been reversed,” FitzGerald said.

But he also said that the biggest factor in the shift away from Appalachian coal as the fuel of choice for new power plants has been the growth of production of natural gas from shale, through fracking and drilling, and the higher costs of mining coal as coal resources get more scarce.

Art Williams, executive director of the Kentucky Conservation Committee, agreed, taking issue with the whole notion of a “war on coal,” saying it was “a politically constructed wedge issue to try to beat Obama and other similarly situated Democrats, like Ben Chandler.”

Chandler lost his Central Kentucky seat in the U.S. House of Representatives after challenger Andy Barr, a Republican, made coal a big part of his campaign.

But Williams, who has been tracking climate change issues for more than two decades, said coal could face additional challenges if the president moves on climate change, as he hinted at during his acceptance speech when he said children should live in an America “ … that isn’t threatened by the destructive power of a warming planet.”

Williams said those comments and the circumstances of the superstorm Sandy, which struck the Northeast shortly before the election and caused tens of billions in damage, “has already created a surge of momentum for the issue to be more directly addressed,” including an accelerated move away from fossil fuels like coal.

“Now more than ever, Kentucky needs not to have all its energy eggs in one basket,” he said of Kentucky’s more than 90 percent reliance on coal for electricity.

Rutherford said his biggest concern with the EPA is how it has imposed certain water quality rules on eastern Kentucky and West Virginia coal mining that it hasn’t imposed on other states in the region, including Virginia and Pennsylvania.

In a case brought by the industry and signed on by Gov. Steve Beshear, a federal judge earlier his year ruled that the EPA “overstepped it’s authority” in the matter. The EPA has appealed.

“We are hopeful since the election is over, that this president will understand how unfair he has been to eastern Kentucky,” said Rutherford, the Pike County judge/executive.

Beshear, also a Democrat, congratulated the president in a written statement.

But the governor said EPA’s action had “essentially halted three dozen pending coal permits in Kentucky — permits that were met with erratic and unpredictable changes in EPA standards. My Energy and Environment Cabinet has worked tirelessly with the EPA to resolve these issues. However, the EPA has turned a deaf ear to us.”

Yet, despite the threat from regulation and cheaper natural gas, Beshear said he is “optimistic that coal will continue to play a very important economic role in our state for years to come.”

James Bruggers writes for The (Louisville) Courier- Journal, where this report appeared November 11.