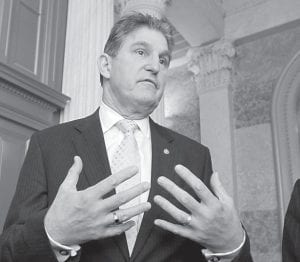 In West Virginia, Sen. Joe Manchin boasts about his unyielding opposition to the EPA and his confrontations with the administration. (AP)

Friends of coal are certain they know the enemy.

They fault President Barack Obama and his Environmental Protection Agency for new clean air rules they deride as a devastating blow to a multibillion-dollar industry that has been the lifeblood of Appalachia for generations. The agency standards imposed earlier this year tightened limits on existing coal poweredplant emissions while guidelines on restricting greenhouse gases could affect new plants as early as 2013.

Along the rolling hills of this tiny Ohio town — population just over 5,100 — campaign signs for judges, state legislators and county officials crowd the neat lawns. As the road curves toward the interstate, one banner overshadows them all: “End the war on coal. Fire Obama.”

Barb Swan, who runs Swan’s Sport Shop on West Main Street, is a registered Democrat and daughter of a coal miner. She won’t be voting for Obama and she won’t back Democratic Sen. Sherrod Brown, whom she contends puts the president’s energy policies over the interests of his constituents. 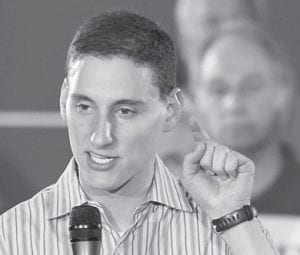 In Ohio, where coal is responsible for some 3,000 underground and surface jobs, Republican Josh Mandel (above) seeks to unseat Sen. Sherrod Brown (right). (AP)

“If you have a district that’s coal, you fight for coal,” argued the 67-year-old Swan.

Obama’s moves on clean air and fossil fuels have complicated the lives of Democrats in coalrich states that count on mining for jobs and economic growth, with incumbents and candidates adopting drastically different strategies to ensure their own political survival.

In West Virginia, where the president is wildly unpopular, Sen. Joe Manchin boasts about his unyielding opposition to the EPA and his confrontations with the administration. In his latest campaign ad, Manchin — rifle in hand — alludes to a previous commercial in which he shoots Obama’s bill to cap greenhouse gases from coal-burning power plants. The senator says the state has enough coal and natural gas to provide energy and jobs for decades, and “I’ll take on anyone who tries to stop us.” 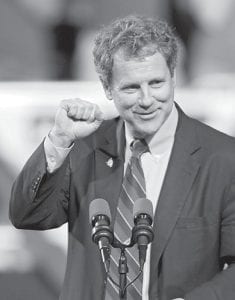 The White House, for its part, insists that the criticism of its re- cord on coal is unfounded.

“The president has made clear that coal has an important role to play in our energy economy today and it will in the future, which is why this administration has worked to make sure that moving forward we can continue to rely on a broad range of domestic energy sources from oil and gas, to wind and solar, to nuclear, as well as clean coal,” said Clark Stevens, a White House spokesman.

The administration points to a 31 percent increase in coal exports and greater flexibility in enforcing the new standards. The economic prospects for coal, Stevens said, “reflect the independent, financial decisions that utilities are making in response to the increase in cheap, abundant natural gas.”

Coal’s woes do extend far beyond the new EPA rules.

Natural gas is plentiful, less expensive and more environmentally friendly. A rush is on in the same Appalachian towns where coal has been king to claim natural gas mineral rights in the region’s Marcellus and Utica shale reserves. Out-of-town lawyers have descended upon the courthouse in the Belmont County seat to pour over decades-old deeds and titles, some dating to the late 1800s, as they figure out which families should get checks.

“The hallways are filled,” said Kent Moore, the former Republican Party chairman in Belmont. “They’re moving from one county to another.”

In 2011, U.S. production of natural gas surpassed coal production for the first time in 20 years, according to the government’s Energy Information Administration.

China’s economic slowdown and the diminishing demand for the top-grade coal to make steel has affected coal in the eastern United States. Other countries, such as Brazil, are moving ahead with their production.

“It’s a perfect storm of bad things that can happen,” said Carol L. Raulston, a spokeswoman for the National Mining Association. But listen to an Obama campaign ad on country radio in eastern Ohio, and coal and natural gas are doing just fine. The spot says coal production is up 7 percent and coal jobs have increased 10 percent during Obama’s tenure. Natural gas production is at an all-time high.

His campaign contends that Obama would be better for coal than rival Mitt Romney, and the commercial highlights the Republican saying in 2003 that he wouldn’t back a coal-fired plant “that kills people.”

Romney accuses Obama of imposing regulations that would “bankrupt” the coal industry. He promises that the United States will become energy independent by 2020 through more aggressive exploitation of domestic oil, gas, coal and other natural resources. The Republican also vows to pursue measured reforms of environmental laws and regulations without impeding jobs or industries.

Anti-Obama commercials on the radio in Ohio use the president’s 2008 remark that if someone wants to build a coal-powered plant, they can go ahead, but “it’s just that it will bankrupt them.” The tagline says “let’s cap Obama and trade him for Mitt Romney.” The United Mine Workers of America, which endorsed Franklin D. Roosevelt in 1936, John F. Kennedy in 1960 and Obama in 2008, has declined to back a presidential candidate this year, saying it doesn’t see either Obama or Romney offering the best opportunities for its members.

For Manchin, support for coal is personal, business and political commonsense.

In the early morning of Nov. 20, 1968, an explosion at the Mountaineer Coal Co. mine in Farmington, W.Va., killed 78 miners. Among the dead were Manchin’s uncle, John Gouzd, and high school friends.

In the years since, Manchin owes some of his wealth to Enersystems Inc., a coal brokerage firm he once helped operate. Manchin’s financial disclosure forms in 2009 and 2010 showed operating income of more than $1.7 million.

West Virginia is the second largest coal producing state behind Wyoming and its mines and plants add up to more than 21,000 underground and surface jobs, according to the Energy Department. Coal mined in Appalachia generates electricity, is shipped overseas and is used in metal production.

Manchin has repeatedly challenged the Obama administration over coal. In 2010, as West Virginia governor, he sued the EPA over its crackdown on mountaintop mining.

“ Enough is enough,” Manchin said this past June. “The people of West Virginia are tired of the EPA’s overreach, and I will do everything in my power to rein in the EPA — and any agency that oversteps its authority.”

The Democrat has consistently voted with Republicans for legislation to roll back EPA rules.

Yet, in the one and only Senate campaign debate earlier this month, Manchin repeatedly had to defend himself against criticism from Republican rival and businessman John Raese, who tied the Democrat to Obama.

“Who controls the environmental rules, that’s the executive branch and that’s handled by his quarterback, Barack Obama,” said Raese, delivering his rhetorical stabs with the smooth voice of a late-night deejay on one of his radio stations. “Joe’s heart … is in the right place. I’m not saying it’s not. I’m just saying the team that he’s on has no interest at all in helping West Virginia. The only interest they have is getting us out of the fossil fuel business.”

Manchin insisted he would fight for coal, no matter what.

“The government should be your partner. It shouldn’t be your adversary,” he said on the debate stage at Shepherd University in Shepherdstown, W.Va. “It should be your ally and that’s what we don’t have in Washington and that’s what I’ve been working for. And I’ll work with whoever the president. I worked when President Bush was there. I worked with President Obama. I will work with the next president.”

West Virginia voters are expected to give Manchin a full six-year term in November. Obama lost the state in 2008 by 13 percentage points and in this year’s Democratic primary in May, a convicted felon in Texas got 40 percent of the vote to the president’s 60 percent, a fresh reminder of Obama’s unpopularity in the state. Romney is expected to handily win West Virginia’s five electoral votes next month.

In Ohio, coal is responsible for some 3,000 underground and surface jobs, and generates more than 87 percent of the state’s electricity. Ohio is seventh in the nation in coal reserves with 23.7 billion short tons and Belmont County is the leading coal producer in the state, churning out 760 million tons since 1816, according to the Ohio Coal Association.

Power plants that burn coal produce more than 90 times as much sulfur dioxide, five times as much nitrogen oxide and twice as much carbon dioxide as those that run on natural gas, according to the Government Accountability Office, the regulatory arm of Congress. Sulfur dioxide causes acid rain; nitrogen oxides cause smog; and carbon dioxide is a so-called greenhouse gas that traps heat in the atmosphere.

The EPA tightened limits on power-plant emissions of sulfur dioxide and nitrogen dioxide, and placed new limits on mercury, a poison found in coal. That step will force some of the dirtiest and oldest coal plants to close.

Even more disconcerting for the industry is the EPA guidelines that could limit greenhouse gas emissions from new power plants as early as next year.

In Ohio, Brown faces a challenge from Republican Josh Mandel, who at a recent campaign stop eagerly compared the Ohio Democrat’s record on coal and energy to Manchin’s. He linked Brown to the president.

“Obama is the general in the war on coal and Sherrod Brown is his lieutenant,” Mandel said.

Brown defended his record in a brief interview.

“My record on energy is broad,” he said. “I think as the president said, ‘You look everywhere.’ You start by taking away the tax breaks for the oil industry. You hear these Republicans say the president is picking winners and losers on energy and they insist on subsidizing oil, and there’s no rhyme or reason to subsidize oil.”

Brown wears a canary in a cage lapel pin, which he says “symbolizes to me the role of government in peoples’ lives to make things better whether it’s mine safety or Medicare or Social Security.”

But Mike Carey, chairman of the Ohio Coal Association, doesn’t see Brown as a friend of coal.

“You can have very safe miners, but if they can’t mine coal, maybe they’re going to be selling canaries because they’re not going to be mining coal,” Carey said.