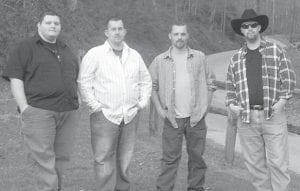 TO APPEAR — Coal Town will headline the Relay for Life Spring Fling at River Park in Whitesburg.

The first time I heard the Coal Town musical group I knew I was listening to something special. Every now and then a new band emerges with a sound that is so fresh and distinctive it is hard to categorize.

When you hear their musical instruments you think of bluegrass music and each band member does indeed have a background in that genre of music, but one would have to create a new definition to describe their sound. Their music is not your typical high lonesome sound nor is it your hard-driving bluegrass characterized by rapid tempo instrumental improvisations.

Take away the banjo and mandolin and you have a country or pop sound that brings back reminders of The Eagles. Coal Town’s first CD, “Appalachian Blues”, was released in April but two of their singles released earlier were already making their way up the charts. “Better off Blind” went to number five nationally on the Bluegrass Programmers Charts and “Don’t Go Down in No Mine’, is getting a lot of play.

When the band recently recorded their first CD they asked well-known bluegrass musician Larry Cordle to review their music. They had not yet found a suitable title, but when Cordle expressed the notion that their music was some of the best Appalachian blues he had heard, they knew they had a title.

Songwriter Mike Wells, originally from Kermit, W. Va., now lives in Wise, Va. The lyrics of his 11 original songs cover subjects that run the gamut of traditional country and Appalachian folk music, subjects like cryin’, cheatin’, drinkin’ prayin’ and learnin’ one’s lesson. He has found the perfect combination of harmonic voices and masterful musicians to deliver his music the way he intended it to be. Coal Town has a soft, no frills believable sound that just suits Mike Well’s lyrics.

One of my favorites from the CD, “Tina at The Teardrop Inn”, is destined to become a classic. When the cheatin’ husband is caught with another woman he knows his days on earth are numbered when he is told that “there will be no cold Budweiser where you’re goin'”. Only writers like Mike Wells could find those expressive lyrics that many country boys can relate to.

In his review of ‘Appalachian Blues”, Larry Cordle says, “I predict big things for Mike from this CD and in the coming years from other artists looking for a hit”.

Josh Slone recalls that music has always been a part of his life. His dad, Willie Slone, was a part of the Slone Brothers family band that played a lot of bluegrass music and recorded on a label a few years ago.

“I was around music all my life but as a teenager I got interested in jammin’ with the family. My uncle, Orbin Slone, especially was influential. He taught me a lot,” said Josh. “This is the third band I’ve been a part of and we’re staying pretty busy. We recently opened for Newfound Road at Appalshop in Whitesburg and we just got back from Flat Rock, Mich., where we did two shows then we went to Toledo, Ohio, for two shows. Our next show is on April 29 in Lexington, Ky., where we will play on the Red Barn radio show before a live audience. The program will be replayed on the University of Kentucky radio station. Next year we will be playing some shows in Canada. We have plans to record another CD soon with songs written by Larry Cordle.”

Nikkey Jo Johnson is a senior at Jenkins High School and plans to attend Hazard Community College and major in bluegrass music. Dean and Bobby Osborne of the famous Osborne Brothers Bluegrass Band conduct the classes. At age 17 Nikkey Jo is no stranger to performing. His dad, Roy, played music with the legendary country/pop musician Marlow Tackett several years ago. When Nikkey Jo was two years old, Marlow set him on the stage at one of his shows and handed him a microphone and of course Nikkey Jo did what he was destined to do, he began singing. At age four, Roy taught him a few basic chords on a guitar and he was on his way. Through the years he has played in the Kentucky Red Band along with his dad, his Aunt Jane and his Uncle ‘Red’ Roberts. He also plays occasionally with the Dawson Creek band and Duelin’ Strings. He has a great career ahead of him.

On May 9, Coal Town will headline the Relay for Life Spring Fling at River Park in Whitesburg. The event is organized as a benefit for the American Cancer Society. There is no admission. Music will begin about 11 a.m. and continue to 6 p.m. Several bands are donating their talent for this very worthy cause. The event will also include arts and crafts, novelties, kiddy events and food booths. For additional information, call Ked Sanders at 832-4122 or Alberta Perry at 855-7962.