Coal workers hold their own rally in Frankfort 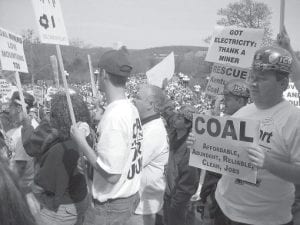 More than 1,000 coal miners staged a rally on the front lawn of the state Capitol in Frankfort last week to protest legislation that they fear could eliminate their jobs. (AP Photo/Roger Alford)

Some 1,500 coal industry workers staged a mass rally on the front lawn of the state Capitol last week to protest legislation that they fear could eliminate their jobs.

Gov. Steve Beshear made a brief appearance at the rally to pledge his support to the workers, drawing boisterous applause from men donning hardhats and waving placards. He said coal is a cornerstone in the state’s economy, and that he wants to help the industry.

“This state during this administration is going to become a leader in the energy policy that’s going to push clean coal technology, so that we will continue to be able to burn Kentucky coal for as many years as you and I and the coming generations are going to be here,” Beshear said.

Coal miner Rocky Coleman, a resident of Kemper in the eastern coalfields, said the rally is intended to show lawmakers that a huge number of Kentucky voters strongly oppose legislation that would hurt an industry that employs more than 15,000 people across the state.

“If this had passed, I’d probably be out of a job, eventually,” said Coleman, standing in a crowd dotted by pro-mining placards.

“Got Electricity: Thank A Coal Miner,” one read. “I’m A Coal Miner And I Vote,” said another.

Mountain residents and environmentalists promised that they would try again to get lawmakers to get involved in their decades long fight to end the method of mining that has changed landscapes in the coalfields.

Teri Blanton, a member of the environmental group Kentuckians for the Commonwealth, said getting lawmakers to hold hearings on the issue shows that opponents of so-called “mountaintop removal” mining are gaining ground.

Blanton and others have been lobbying for four years for legislation that would prohibit coal companies from dumping dirt and rock from mountaintops into streams and valleys. Until this year, the measure hadn’t even been debated.

And, until last week’s opposition rally, coal miners had largely ignored the push by environmentalists, thinking they had little chance of getting legislation through the Kentucky General Assembly.

A move by House Appropriations and Revenue Committee Chairman Harry Moberly, DRichmond, got their attention. He held two days of hearings on a measure that would have barred coal companies from dumping dirt and rock from mountaintops into streams and valleys.

Bill Caylor, president of the Kentucky Coal Association, said the legislation would have crippled the mining industry, forcing companies to lay off workers and driving up the cost of coal.

Caylor and other industry leaders argued that mountaintop removal has a positive side that lawmakers shouldn’t ignore, including the creation of flat land that communities can use for economic development. The Kentucky Coal Association circulated a publication filled with photos of reclaimed mountaintop coal mines, some covered with lush vegetation and wild animals and others with housing subdivisions, golf courses, airports, cow pastures, horse farms, even industrial parks.

The legislation is House Bill 526.