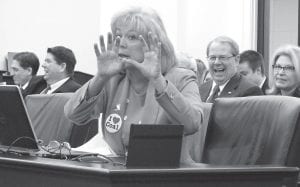 In a push to increase the number of college graduates in the coalfields, the House Education Committee last week passed legislation to create special state scholarships that won’t be available in other regions.

Democratic state Rep. Leslie Combs of Pikeville, the bill’s sponsor, said the scholarships of up to $6,600 a year would go to college juniors and seniors living in one of the state’s 34 coal-producing counties in eastern and western Kentucky.

The bill, similar to one that failed in the Legislature last year, cleared the Education Committee unanimously.

“I think a lot of people now understand what we’re trying to do,” Combs said.

Called the Kentucky Coal County College Completion Scholarship Program, the initiative is a compromise that came from a failed push last year to create a four-year public university in the Appalachian coalfields. Lawmakers saw that proposal, intended to boost the number of college graduates in the region, as too expensive considering Kentucky’s tight state budget. The General Fund hasn’t rebounded from more than $1 billion in cuts over the past five years.

Proponents of making the private school a public institution argued that Kentucky’s mountain residents need a four-year state university closer to their homes. The nearest ones now, Eastern Kentucky University and Morehead State University, are more than two hours away from Pikeville.

Former Gov. Paul Patton, now president of the University of Pikeville, urged creation of the scholarship after it became clear lawmakers weren’t going to approve the university proposal.

“I think it’s a good compromise,” he said February 14.

Gov. Steve Beshear later stepped in with an executive order authorizing more than $4 million from coal severance tax revenue to start the scholarship program on a pilot basis in a handful of Appalachian counties.

“There’s a very strong sentiment that we should use coal money in coal regions,” Combs said.