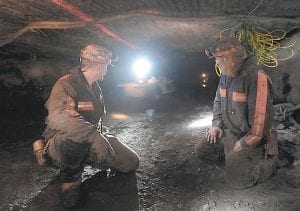 Miners watched as a piece of equipment passed by in the Tech Leasing and Rebuild Inc. Mine #1 in Buchanan County, Va., in this 2010 photo. Coal has emerged as a defining issue in the race for governor in Virginia, even though the industry began its steady decline well before the phrase “war on coal” was coined and ahead of the introduction of new U.S. pollution limits. (AP Photo/Bristol Herald Courier)

Coal has emerged as a defining issue in the race for Virginia’s governor, and the stark divide between Republican Ken Cuccinelli and Democrat Terry McAuliffe has grown wider with the release of new federal pollution limits on coal-fired power plants.

The political debate centers on potential job losses southwest Virginia’s coal industry would sustain under the proposed pollution guidelines. Cuccinelli contends that McAuliffe is complicit with the Obama administration’s proposed regulations, which he contends would devastate the state’s rugged, economically depressed coalfields region.

In Virginia, however, mining and miners have been shed at a steady pace over the last two decades, primarily for geological rather than political reasons, and well ahead of this pitched race for governor.

Since 1990, the historical peak year for production, Virginia coal jobs have declined from 10,600 people directly employed in the industry to 4,713 last year.

About half of the nearly 500 mines in 1990 are being worked today, while coal tonnage has dropped from the peak 46.5 million tons to 19.1 tons last year, according to figures from the Department of Mines, Minerals and Energy.

A number of factors have contributed to the decline, including environmental regulations, but the industry and analysts say the primary reason is fewer accessible coal reserves to mine in Virginia.

“We’ve used a lot of the easier to get, less expensive to mine reserves,” said W. Thomas Hudson, president of the Virginia Coal Association. The coal that remains, he said, is in thinner, deeper seams than the coal mined in West Virginia and other coal-producing states and therefore more expensive to mine.

“That has a lot to do with a drop in production over the last 20 years,” Hudson said.

The EPA rules would set the first national limits on heat-trapping pollution from future power plants, moving the nation from coal to cleaner sources of energy.

McAuliffe has been dogged by his statement four years ago, during his failed bid for the party’s gubernatorial nomination, that he hoped to never see another coalfired plant constructed in Virginia. He refused to be pinned down on the issue during this campaign until he was pressed by a reporter for his position on the pollution guidelines.

Cuccinelli’s seized on the admission. His campaign issued a statement that questioned McAuliffe’s stand, contending the pollution limits would cost Virginia jobs.

“As I have said repeatedly in recent months, the war on coal is a war on Virginia’s poor and a war on competitiveness for Virginia,” Cuccinelli said in a statement.

Coal mining is limited to seven counties in southwest Virginia, and three of them account for the majority mined in the state. Buchanan leads with 34 percent of Virginia’s coal, followed by Wise with 33 percent and Dickenson with 20 percent. The state produces thermal coal used in power plants and metallurgic coal highly coveted globally by the steel-making industry.

Virginia’s so-called met coal is shipped out from Newport News to overseas markets at a premium price.

“A lot of what’s underground in Buchanan County ends up on the world met market,” said Nino Ripepi, an assistant professor with the Department of Mining and Minerals Engineering at Virginia Tech. “I think we had record exports last year of coal on the world market. If that stays strong, we’ll continue to mine our met deposits.”

But he agrees with Hudson that most of the coal to be found in Virginia simply is not economically viable to mine.

More recently, another energy industry also has had a hand in eroding coal’s footprint: natural gas . ousands of wells have sprung

Th up in southwest Virginia to capture methane gas. It is part of a national rush to drill for the abundant and cleaner resource, primarily in shale formations stretching from upstate New York to West Virginia that are laced with natural gas.

“In the last five years, the boom in natural gas, especially shale gas, has allowed the EPA to create tougher regulatory enforcement for the coal industry,” said Patrick Baker, an Appalachian Law School professor who teaches oil and gas law. “There’s no doubt that a tougher regulatory environment has resulted in lower coal production. I’m not saying that’s good or bad.”

Virginia’s coal mining also has declined as competition increases from other coal-producing states in the West and Midwest, where coal is more accessible and cheaper to mine.

Despite the industry’s historic decline, and its bleaker future prospects, it still is a dominant industry in southwest Virginia, offering jobs that pay wages well above the norm in a region that has struggled to replicate it.

A 2012 study commissioned by the Virginia Coal Association found that the coal’s total eco- nomic impact in the state was $5.5 billion and that the top three coal-producing counties reaped more than 20 percent of their local revenues from the coal industry. The average annual wage for a southwest coal worker is $84,978 compared with $34,757 for workers employed in all industries in the region, the study said.

“Obviously, coal is the economic engine that historically has driven that region,” Hudson said.

Cuccinelli’s claim that McAuliffe is a foot soldier in what critics call Obama’s “war on coal” resonates with Joe Street, a coowner of West River Conveyors in Buchanan County. The business has thrived, diversified and grown despite the decline of coal in Virginia.

“McAullife is not a friend of coal,” Street said. “He’s riding side by side with his buddy in Washington, D.C., President Obama, and all the EPA directors that have the intentions of destroying the coal industry with green initiatives.”

Street said he’s weathered the industry’s slide by seeking new markets in West Virginia, Canada, the deep South and elsewhere. West River’s customers were once all coal-related, but the industry now represents 75 of his business.

While coal’s footprint has shrunk, coal tax credits created in 1996 in recognition of depletion of accessible coal has helped fill the job gap with an economic development authority that has created close to 20,000 jobs over the last few decades. The coal industry recognized the need to diversify the economy, Hudson said.

The political debate, he said, boils down to the question: “Are we going to keep what we have or are we going to drive production even lower?”

He added, “I think it’s going to continue to be very tough over the next several years.”