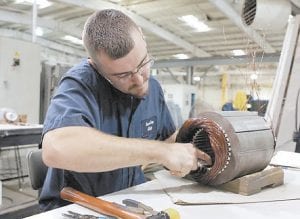 Get a bigger piece of the shrinking pie.

That’s how Danny Vance, owner of Service Pump & Supply in Huntington, describes his business strategy during challenging times for the coal industry and the many businesses that support it.

With the cost of mining coal rising and with natural gas becoming so competitive, the coal industry is in the midst of a battle. And Vance and some other local companies whose health is intertwined with the coal industry say they are doing what they can to fight the trend’s ripple effect.

“So far we’ve been able to adapt and not had layoffs,” said Vance, whose company sells and services pumps, blowers and other equipment used in the mines. “We’re down about 15 percent, and we’re very fortunate. A lot of companies like us are down 50 or 60 percent and are shutting the doors.” The challenge has been the rise in the cost of producing coal compared with the low cost of natural gas, with the jackpot found in the Marcellus Shale formation that spans West Virginia, Ohio, Pennsylvania and New York.

According to the U.S. Energy Information Administration’s annual report released in June, higher coal exports provided some support in 2011, but U.S. coal production is projected to decline for four years thereafter as a result of the low natural gas prices, rising coal prices, lack of growth in electricity demand and increasing generation from renewable energy sources.

New federal environmental regulations are projected to take a toll on coal as well, including requirements to control emissions of nitrogen oxides, sulfur dioxide and air toxins such as mercury and acid gases. That will result in the retirement of some coal-fired generating capacity, including some here in West Virginia.

Charles Patton, president and chief operating officer of Appalachian Power, told The Herald- Dispatch earlier this summer that the company will close some of its older plants that won’t meet new regulations of the U.S. Envi- ronmental Protection Agency by 2015. It also will convert some operations from coal to natural gas.

After 2015, coal projections vary by region, according to the EIA. Coal produced from the heavily mined, higher-cost reserves here in Appalachia will be replaced with lower-cost coal from places like Illinois and Wyoming, the EIA reports. But there’s an expected increase in production in northern Appalachia that moderates the region’s overall decline, the EIA says.

The EIA projects overall U.S. coal production to grow at an average annual rate of 1 percent through 2035, with coal used for electricity generation increasing as electricity demand grows and as natural gas prices rise. More coal also is expected to be used for production of synthetic liquids, and coal exports should increase, the EIA says.

All of it means that businesses related to the coal industry are doing what they’ve gotten pretty good at over the decades — getting creative, diversifying and making adjustments.

“We are, by nature, survivors,” said Nick Carter, president and chief operating officer of Natural Resource Partners in Huntington, which owns coal properties throughout the country. “We’ve done it every time there’s been a downturn in the market. This is the — I don’t know — sixth, seventh, eighth downturn in the 30 years I’ve been in the business, and it’s the third downturn since we went public 10 years ago. It’s a cyclical market, and you learn to live with the ups and downs.”

For NRP, that’s involved limiting its Appalachian investments to properties with metallurgical coal, which is still in demand internationally. That type of coal is used in the production of steel.

However, “Metallurgical is only 6 percent of total coal production,” Carter said. “It’s only 60 million tons out of a billion tons of coal produced. … It’s the high quality, high valued product, but it’s not very much of the market.”

Meanwhile, Foresight Energy, a low-cost operator in Illinois, has been successful in selling coal and building new mines where NRP owns the reserves. That will produce in excess of 20 million tons in 2013, Carter said.

“We’ve certainly seen a number of mine closures and cutbacks in Central Appalachia that have impacted our production and the revenue from our properties, but percentage-wise it has not been as bad as many companies have been,” Carter said. “We have been buying assets in the rock quarry business — limestone, sand, gravel, slate.”

The percentage of NRP’s income from those products has increased, and NRP has been buying oil and gas revenue streams in addition to the aggregates and coal properties it has, Carter said.

“We’re trying to diversify our income stream as much as possible, both within the coal space and outside the coal space,” he said. “We’ve made it fairly well. We had earnings released and it was a pretty good quarter. … Tonnage to be produced from our property was down, but other revenue other than coal revenue was up.”

For the six months that ended in June, total revenues were up less than 1 percent from 2011, according to the report. He thinks shareholders were happy though, as the stock prices went up a bit.

At J.H. Fletcher & Co., trends in the coal industry have slowed work down in terms of domestic customers, but it helps that Fletcher does a lot of work internationally — particularly with Australia, Poland and South Africa, said Rod Duncan, president.

Fletcher makes various equipment for the mining industry — such as roof bolters, scaling machines, power loads and more — and does business with 17 countries around the world.

“We’re diversifying in our industrial minerals markets, and it’s cut back on employee overtime and temporary labor.

“We do everything we can to keep our permanent employees,” Duncan said.

While it has reduced employee hours, several of the company’s vendors have let people go due to the reduced parts orders they have received from Fletcher, he said.

“It’s an interesting period to see which way the market is going to go,” he said. “We’ve seen the market go up and go down many times in our 75 years.”

Tim Duke, president of Steel of West Virginia, said that coal is not a big part of his company’s business but it is a core part of its business, in terms of making mine rails and ties that hold rail down in the mines.

Adapting to change “is not that easy. You can’t just go out and say, “We’re going to put something else on the mill,” Duke said. “Steel in frack gas is not the kind of steel we make. We’ve started to get into the solar business, which competes somewhat with coal. We’re a pioneer in making special shapes that go into solar farms. We’re more into that now than the mining.”

Those are being shipped out to places throughout North America, he said.

“We developed special lightweight sections easier for contractors to pound into the ground,” he said. “We’re the first ones who came out it with it. Others have followed, but we were the first … about four years ago. It helped us during the downturn.”

For Service Pump & Supply, there’s been a little luck and a lot of strategy in coping with the changes in coal, said Vance, who founded the company 32 years ago. It now has 93 employees in four locations.

“We’ve always tried to diversify, No. 1, but it’s very difficult in that no other companies use pumps like coal mines do,” Vance said. “They’ll use 10 times as many pumps as any plant we deal with. We have expanded into other industries, but ….we’re still 70 percent coal mining industry. We’ve grown in the past 10 years, but it’s still the same percent.”

One good thing is that much of the coal in West Virginia and Eastern Kentucky is metallurgical coal.

“As long as China and India and Russia (build), then they’re going to need steel (that is made in metallurgical coal-fired plants), and we’re going to be OK in those instances,” Vance said.

That’s a good example of how global the economy is these days.

“As small a company we are affected by what’s going on in China, India, Brazil and any economy that is expanding and building and needing steel,” he said.

It’s started manufacturing as well as distributing, and it does service as well.

A few years ago, the Mining Safety and Health Administration issued regulations for rock dust in coal mines to prevent explosions.

“It was perfect timing, and we came out with a new rock duster, and we were able to sell a great number of those,” Vance said. “We’ve improved on that and come out with more models, and those have supplemented and kept people working.”

In terms of service, Service Pump & Supply has just become the first pump company in the world to get a certification from the bearing company SKF Group. To this point, SKF has only certifi ed motor companies.

“I’m proud that people see the kind of work that we can do,” he said. “We could do nuclear power plants if we needed to it. … We surprised them, I think, in a lot of the things we were doing already. But we had to do more documentation. Everything looks great, and I’m very proud of our people.”