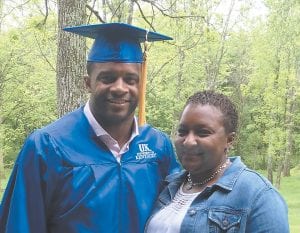 Tina Cobb could not be prouder of her son, Randall. He recently went through graduation at UK and has a $40-million NFL contract. But Tina Cobb says she enjoyed watching him more at UK than in the NFL.

In four years with the Green Bay Packers, Randall Cobb has had 335 receptions for 4,214 yards and 33 touchdowns. Cobb also has a 108-yard kickoff return for the Packers.

The former University of Kentucky star signed a four-year, $40 million contract to stay with the Packers before the 2015 season. Yet you might be surprised to know that his mother, Tina Cobb, still thinks it was more exciting to watch him play when he was at UK than it is in the NBA.

“I always watch him play because you never know what might happen in a game,” Tina Cobb said. “But it was just more exciting when he was in college. I felt like in college, everybody’s heart was really in it. In the NFL, they are out to hurt each other. I just think about that all the time. I don’t want him to get hurt. 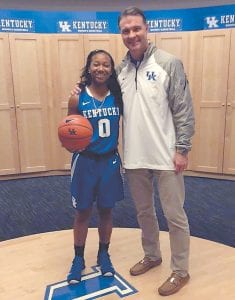 Memphis point guard Jaida Roper is not worried about past defections from coach Matthew Mitchell’s team. Instead, her focus will be solely on winning.

She doesn’t go to many NFL games. For one reason, it’s easier to watch games on TV. But there’s also another major reason.

“It is hard to sit and listen to the critics (fans) and people talk about your son when things do not go your way and you are not able to defend your child. It’s just easier to watch on TV,” she said. “Everybody seems to be more worried about fantasy football than the person individually.”

She admits her son’s NFL success has been “unbelievable” and how her son dreamed of something like this happening.

“I remember when he was in college and I had moved to Kentucky briefly and we were out together. He said, ‘Mom, if I had the opportunity to go to the NFL before my senior year, would you be okay with that?’ I was like if that is what you want to do, fine. But in the back of mind I was not thinking that was going to happen because he was so little. But he had his mind made up. He left UK after his junior year and it worked out fine,” she said.

Part of the reason why is his relationship with Green Bay quarterback Aaron Rodgers. The allpro quarterback even came to Cobb’s recent graduation at UK.

“He is like a big brother to Randall and Randall is like a little brother to him. I watch them in games and on the sidelines and I can see Aaron tell him it is okay if he makes a mistake and is being too hard on himself.”

Still, even though Randall Cobb’s graduation was Kentucky Derby weekend, Tina Cobb never thought about Rodgers being at the Derby and then coming to Lexington for the graduation. 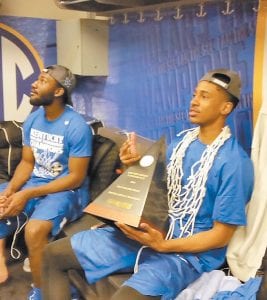 Charles Matthews had the net around his neck and SEC Tournament championship trophy in his lap after UK’s win over Texas A&M in March. Now he’s decided to leave Kentucky. (Photo by Larry Vaught)

“I was so surprised when Randall said Aaron would be there. Trust me, I was not thinking it would be that Aaron,” she laughed and said.

After a run of player and assistant coach departures along with de-commitments from recruits, the Kentucky women’s basketball program got a needed boost from the signing of Memphis point guard Jaida Roper last week.

The 5-7 Roper averaged 13.2 points, 5.2 assists, 4.1 rebounds and 2.8 steals per game as a senior when her team set a school record with 27 wins. She had over 1,500 points in her career and helped Houston High School win 96 games in her four seasons. She scored 22 points in the state championship game as a senior and was named the tournament’s most valuable player.

Roper didn’t know a lot about the Kentucky women’s program until recently after she was released from her commitment to Louisiana Tech. However, she knew plenty about the UK men’s program because she grew up a fan of coach John Calipari when he was at Memphis.

“I was a big fan of John Calipari. My favorite team was when D (Derrick) Rose was there,” Roper said. “It was a dream of mine to be at a school where he coached. I told coach (Matthew) Mitchell that before I even came to visit.

She also is looking forward to playing with one particular returning player.

“I look forward to playing with everyone, but everybody has told me how much I am going to like playing with Makayla (Epps), so I can’t wait for that,” Roper said.

She’s also not worried about what has happened in recent weeks with the UK program.

“I have a lot of faith in coach Mitchell. I feel that he is a great person and even better coach,” Roper said.

Murray, Maker And The NBA Draft

Two years ago it was Thon Maker that Kentucky was recruiting. Eventually, it was his teammate — Jamal Murray — who ended up at Kentucky last season while Maker stayed in high school in Canada.

However, basketball fans in the Bluegrass got to see him play a lot the last two years in Lexington, Marshall County and McCracken County.

Now he’s going straight to the NBA, something he could do because of his age.

So what does ESPN draft analyst Fran Fraschilla see in the future for Maker and the draft?

“Wild card. He’s a very mature 19-year-old. It’s the best way I could put it. He’s long and athletic. I’ve gotten to know him. I run the Under Armour summer camps and he was a camper there last summer. He seems like a terrific kid. He plays with a high motor. His skill level is not at the NBA level right now, and I could see him going anywhere from 20 to 45 (in the draft),” Fraschilla said.

Murray could go in the top five, a spot two years ago that many thought would be where Maker would be.

No Rebuild At WKU

Kentucky native Rick Stansbury says he won’t be about rebuilding at Western Kentucky. Instead, Western’s new head basketball coach wants players that can help the Hilltoppers win immediately just like players at Kentucky and Louisville are expected to do.

“I want the same players Kentucky and Louisville want. I have got to hope they look at a kid and maybe hold off to get a McDonald’s All-American and then that kid makes a commitment to me and turns out to be as good as that McDonald’s kid. Those kids exist, too. There are always kids in this state who become terrific players in college. Kids don’t have to leave this state for Wichita, Butler, Xavier or VCU. Western Kentucky has more tradition than all those programs and I see no reason we can’t be really successful here.”

Those in-state players could include some UK might target next year like John Calipari did three years ago with Derek Willis and Dominique Hawkins. The Cats could lose anywhere from five to nine players off next year’s team and even with Calipari’s recruiting prowess, he could easily target several in-state players in the 2017 class.

After Kentucky won the Southeastern Conference Tournament championship, freshman guard Charles Matthews sat in the locker room with the net around his neck and the trophy on his lap.

“It’s a great feeling. You put all egos aside to win championships. There’s no better feeling than this,” said Matthews in mid-March.

He averaged just 1.7 points, 1.6 rebounds and 10.3 minutes in 36 games with three starts for the Wildcats last season. However, he noted that he saw how former AAU teammate Tyler Ulis benefited from his freshman year at UK and then blossomed into a star as a sophomore.

“My first year has been great. I could not ask for a better situation,” Matthews said then. “I am learning so much. I have been through a lot of bumps and bruises but it is all part of the process, part of the journey. We got the SEC championship and I just want to gain more confidence and use the experience I got this year to become a much better player.”

However, last week he announced he was transferring from Kentucky.

Matthews, who averaged 22 points per game in high school, was an energy guy. He prided himself on defense and rebounding. His athleticism and skills had made him a recruiting target for Michigan State before he picked UK.

“We are all competitors and want to be in the battle but you have to maximize your opportunity and watch and learn,” Matthews told me in March. “At the end of the day, this is what I love. Sometimes we look at the job, business aspects of it too much and lose that joy of the game. I just try to have fun. I just love playing.”

Just not at Kentucky any longer.