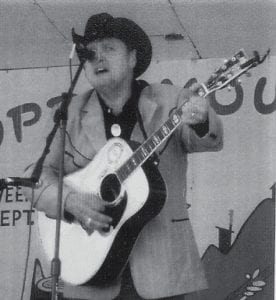 HEADLINER – Col. Larry Fuller will be one of the featured musicians at the Cumberland Mountain Bluegrass Festival July 12-14 in Jenkins.

Only a few musicians have the staying power to remain popular after 35 years in the business. So it is with the very talented bluegrass music singer/songwriter Colonel Larry Fuller, a native of Smith Fork of Phelps in Pike County.

Larry recalls, “I remember when I was 13, lying in bed listening to Ralph Stanley and the Clinch Mountain Boys. I could tell the chord changes; I could hear it in my head. Soon after that I got a guitar and started playing. I guess I got my talent from my daddy. Dad played when he was young. They say he used to walk up and down the hollow and play the guitar while I was on his back. The funny part about that was that I was so young I don’t remember it. Then when I was about 18 years old, he started playing with me; it was strange. And he was really good. He played the old Maybelle Carterstyle, with three fingers . . . they called it finger picking.”

Fuller says he went to Phelps Elementary School then finished one year at Phelps High School before quitting school and moving to Ohio. “It as one of those things where you had to grow up at age 15,” he said. From Columbus, Ohio, Fuller moved to Chicago, and then on to Detroit where he drove a truck for about 10 years.

“In the ’60s, I used to drive from Michigan to Columbus to listen to Dave Evans and Shorty Cole and soon I started jammin’ with them,” he said. From that, Fuller put together his own band called Pike County Grass. He was the lead singer and played the guitar. Others in the band were John Stiltner on the bass, Herb Wolford on banjo and Kenny Stiltner on lead guitar. “We kept the band together for about five years and then started Larry Fuller and The Born Again, a gospel band, and we had it for about seven years. Then I changed it finally to the Larry Fuller Band.”

Fuller said he cut his first 45 rpm record in the early ’70s. “On one side we recorded ‘Foggy Mountain Breakdown,’ which was an instrumental, and ‘God Gave You to Me,’ a Carter Stanley song on the other. It played on jukeboxes in Virginia, West Virginia and Kentucky and it did real well.”

Fuller moved back to Kentucky in the early ’70s and for the next 17 years worked underground in the McCoy-Elkhorn and Chisholm coal mines. Then one day while working in a mine, Fuller injured his back and had to quit. “After I got to where I could get around again, I started singing again and traveling,” he said. “I moved to Irvine, Kentucky, and later to Richmond, where I live today.

“I’ve written way over 100 songs and there are several that I’ve forgotten. When I was 18 I wrote my first song, ‘Little Jimmy.’ I’ll never forget it because Hank Williams Jr. wanted to record it. That’s when I was in Detroit. That’s when I first started getting into music,” said Fuller. “I had one song that was the No. 1 bluegrass/gospel song for over two years in Kentucky, Virginia and West Virginia,” said Larry. “That was ‘I’d Like to Go Back.’ That was cut back in ’84 and I was still living here then. I still hear it all over the country. Everywhere I go, the first song people ask for is “I’d Like to Go Back’ and that really thrills me . . . make me happy. The Lord gave me the words for it and I know that and I never fail to say that. I couldn’t have written anything without Him.”

Fuller had another song that went to No. 1, “Oh Daddy, How I Miss You.” The radio stations still get a lot of requests for it on Father’s Day. He also had another song that went to No. 4 on the Nashville charts, “Tribute to Curly Ray,” referring to the legendary fiddler for Ralph Stanley, Curly Ray Cline. He was invited to perform it at the CCMA Awards Show in the Ryman Auditorium in Nashville, the original home of the Grand Ole Opry. “We were the only bluegrass band invited. I did my own writing and recording and that’s what has kept me going for so long,” he said.

Larry and his wife, Tina, have been married for 40 years and have two sons, Larry Jr. and Ricky, both of Richmond. Ricky plays the guitar, mandolin and banjo, and has played with the Larry Fuller Band for 24 years. He started when he was 10.

Larry says Ralph Stanley is one of his heroes. “I’ve played many a show with Ralph and he recorded one of my songs, ‘I’ll Be Wearing a Crown of Glory.’ He recorded that on one of his all-gospel albums, ‘My All and All,’ a few years back. I’m mighty proud of that.”

Another thing Larry is proud of is being a Kentucky Colonel. In fact, he is know as Colonel Larry Fuller. He was commissioned by Gov. Paul Patton in 2000 “for his outstanding community services and keeping the ‘grass’ roots of bluegrass alive.”

“I’m not booking as many shows now; I’m staying pretty close to home. Through the years I’ve worn out Greyhounds, five or six vans and I don’t know how many cars,” said Larry.

In 2005 Larry Fuller was inducted into the George B. Hays Music Hall of Fame located in Mammoth Springs, Ark. The Hall of Fame honors Hays, who founded the Grand Ole Opry in 1925. Some of the other stars already in the Hall include George Jones, Kitty Wells, Bill Monroe, Merle Haggard, and Johnny and June Carter Cash.

Much of the information for this article was extracted from articles in the Richmond Register and the Appalachian News- Express.

The Larry Fuller Band will be the headliner at the Little Shepherd Amphitheatre in Jenkins on Saturday, July 14. More than 20 groups are scheduled to play during the second annual Cumberland Mountain Bluegrass Music Festival scheduled for July 12, July 13 and July 14.