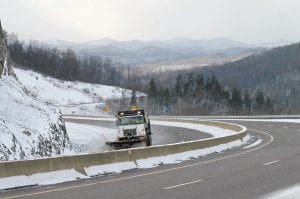 A state highway department truck worked earlier this week to keep snow and ice off U.S. 23, near the Kentucky-Virginia state line on Pine Mountain. The scene has become common this winter, as the eastern half of the United State is enduring bitterly cold temperatures not experienced since 1985. AccuWeather Chief Meteorologist and Expert Long Range Forecaster Joe Bastardi says this winter is shaping up to be as bad as 1977-78, which is regarded as one of the worst ever. “It’ll be like the great winters of the ’60s and ’70s,” said Bastardi. More snow was expected to hit Letcher County this week.