College hoops not so popular elsewhere

A Harris Poll told us last week that college basketball not only ranks last among America’s favorite sports, but is favorite sport of only three percent in USA.

And last weekend provided us a few gems to savor.

• In Lexington, Kentucky’s almost forgotten freshman Derek Willis got a rebound, turned, ignored all things left or right and dribbled up court with an expression on his face that said, “I am Kobe! Outa my way!” He had one thing in view, the rim. Willis split defenders, made a twisting lay-up and brought Rupp Arena’s 22,000- plus crowd to its feet. This IS God’s meadow!

Willis’s was a connection moment with longtime Wildcat watchers who recognize – kid did what a long list of native sons have done for decades at UK – got a chance, took it, exceeded expectation and fans got their moment’s worth too. 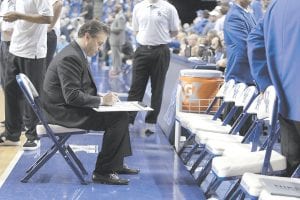 PLANNING THE SECOND HALF — UK Coach John Calipari worked on a plan to start the second half of his team’s victory over Georgia at Rupp Arena on January 25. Calipari may need to start work on a plan to make college basketball as popular elsewhere in the U.S. as it is in Kentucky and other basketball crazy states. (AP Photo)

• In Monroe, Louisiana on Saturday, Western Kentucky trailed host Monroe by 10 points midway first half then went on a 25-1 scoring rampage and won its 13th in 20 games. WKU’s run of points was impressive, but more so the Hilltoppers’ clinical defense. Superb.

• 40-0. Ironic this numbers set originated with Wildcats in Lexington and is now a possibility for Wildcats at Arizona. Sean Miller’s team ( 20- 0) dismantled Utah Sunday with defense and heady play to demonstrate here is a top of marquee college team. Unselfish, rhythmic. A joy to watch.

Comment: This was warning anew we ought be skeptical and suspicious of polls. All polls on anything.

Left unreported – what slice of America was data taken? What social stratum? What time of year or time of week was survey done?

That college basketball rated three percent, begs an answer to this question: (With tongue in cheek) How did Harris Poll researchers manage to leave out data from, say: Kansas, Oklahoma, Illinois, Indiana, Ohio, Kentucky, North Carolina and West Virginia.

The ESPN story did provide a nugget or two of interest. v More people who live in rural areas on the East Coast say they’re fans of the NFL than the general U.S. population. v Those with an annual household income of more than $100,000 are more likely to be baseball fans. African Americans are less likely to enjoy the sport. v More S outherners call college football their favorite sport. v Those with a high school education or less gravitate to auto racing.

In the end, polls are like a ventriloquist’s dummy? Whatever The Man wants Woody to say.

Season tickets for Louisville football 2014 may break records. We haven’t seen a schedule like this anywhere since Bobby Bowden took over at Florida State in 1976 and said, “We’ll play anybody anywhere,” and did.

The first year in the Atlantic Coast Conference Cardinals open with Miami, play at Clemson in the middle, face defending national champion Florida State at home Thursday before Halloween, then travel to Notre Dame before Thanksgiving, and close at home a weekend later against Kentucky.

Question: Having written about anemic non-conference schedules for Kentucky and Louisville this year, what changes would you suggest?

KENTUCKY. Instead of Michigan State in Chicago, Providence in New Jersey and Baylor in Dallas, and Texas Arlington and Eastern Michigan at Rupp, the Wildcats should play schools from a pool: Dayton, St. Louis, Cincinnati, West Virginia and Western Kentucky. Also, home-and-home contracts with Pittsburgh, Indiana, Oklahoma State and/or Ohio State.

LOUISVILLE. Rick Pitino’s team is ranked in the top 15, but its strength of schedule is 75th. Poor for a defending national champion. Cardinal paying customers deserve better opponents, play teams from the pool mentioned for Kentucky.

Worthwhile, a Kobe Bryant opinion last week. The Los Angeles Laker guard who skipped college and went straight to the NBA, told LakersNation.com readers the NCAA isn’t helping ‘players.’ All should make their own decisions,” Kobe says. “… going out and working and having a job. You should be able to make your own choices.”

Bravo. Every 17- 18-year-old ‘player’ should go straight to the NBA’s developmental league if he chooses instead of wasting time pretending to be a student. Kobe’s not-new idea would dismantle one-and-done, open scholarships to student-athletes and level the playing field for coaches who recruit players and studentathletes.