Colonel E was my good friend 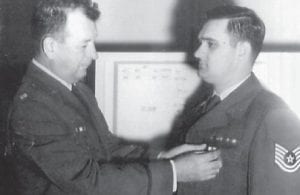 At a packed theater on Travis Air Force Base, Calif., my commander, Col. Harold Evensizer, presented me with my first of three Air Force Commendation Medals I received in my 27-year career.

Colonel E, we called him, was a hillbilly like me, from a small town in Virginia, enlisting in the military in 1937 and assigned to the U.S. Calvary at Fort Meade, taking care of the stables for horses.

Over the many years we served together we were about as close as an officer and an enlisted man could be.

He loved to ride in my Model-A Ford and would call me mornings for me to pick him up for work. We would drive to the in-flight kitchen and my friends would give me two gallons of coffee, and a large tray of 100 donuts.

When we arrived at my print shop, my Military Police friends and my printers were waiting for their coffee and donuts to start the day.

I taught Col. E how to bowl, and put him on my team. When I went to the NCO Academy, he asked me to bring him back a jug of moonshine, which I did.

He had me on his Promotion Board for about four years, knowing I knew most of the enlisted me up for promotion.

After his death, his daughter said that I was like a son to him.

(Major General Joseph Cunningham, the 22nd Air Force commander who signed my award was also a good friend of mine. At noontime we pitched many games of horseshoes to- gether, and sometimes I would let him win! Secretary of the Air Force Harold Brown also signed my award.)