Combs was first from here at MIT 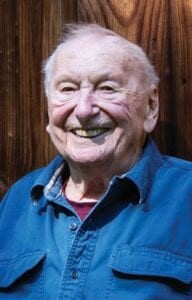 William Hobart Combs, a resident of Fort Myers, Florida since 1991, formerly of New Hampton, New Hampshire and Lexington, Massachusetts, died May 11 in Fort Myers at the age of 92. He was born on December 22, 1927 in Whitesburg to William and Nola Combs, now deceased.

Bill, a 1944 graduate of Whitesburg High School, is survived by his loving children, Jennifer Combs of New Hampton and Patricia Darnell of Oakland, California; five siblings, Ina Hunsucker of Fort Myers, Nona Polly (Glenn) of Lexington, Kentucky, Richard Combs of Chandler, Arizona, Nadine Ison of Las Vegas, Nevada, and Brenda Stallard of Fort Worth, Texas, as well as three grandchildren, Matthew, Christopher, and Nicholas Darnell. He was preceded in death by his wife, Ann Combs, and by his sister, Iris Campbell.

Bill served in the United States Army during WWII, where he taught Morse Code, a skill he learned while working for the L&N Railroad in eastern Kentucky. After his service, Bill earned a BS in Civil Engineering from the Massachusetts Institute of Technology. His family is proud to say that he was the first person from Whitesburg to attend MIT. He was a member of the Phi Sigma Kappa fraternity where he met lifelong friends with whom he maintained close contact until his passing.

After working in the heavy construction industry in his early career, Bill worked at MIT for more than 20 years until his retirement. He and his wife Ann traveled the U.S. and the world, enjoying many adventures with friends and family. He was an amateur radio operator, call sign NT1Q, and used his Morse Code skills to stay in touch with friends and contact other hams across the globe.

Bill was smart, creative, and witty. He could build anything, fix anything, grow anything, and he always had a joke or a song to punctuate any moment. There is not a person he met who does not think of him fondly. He passed on many skills, stories, and jokes that will never be forgotten.

No formal services are planned at this time.

Memorial contributions in memory of William Hobart Combs are suggested to the Friends of MIT Crew at giving.mit.edu/ friends-mit-crew.

Friends are invited to send condolences via the online guest book, which can be found at www.MullinsMemorial.com.