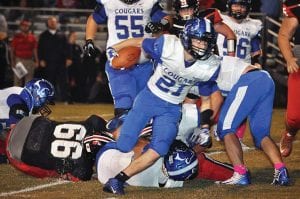 Letcher County Central’s Hunter Campbell (21) breaks free for one of his 20 rushes during the Cougars’ 21-20 win over Whitley County. Campbell rushed for 124 yards and two TDs. (Photo by Dean Manning)

Trailing 20-0 in the first quarter the LCC defense stiffened and didn’t allow a score the rest of the game. The win improved the Cougars’ record to 4-5 but more importantly 3-1 in district play thus earning a first round home playoff game at Cougar Field.

Letcher Central received the opening kickoff and were moving quickly down the field when Whitley County recovered a fumble at their own 35-yard line to derail the scoring opportunity.

Colonel running back Zach Saylor found a big hole up the middle for a 25-yard gain and 3 plays later Saylor would punch it in from 7-yards out. The extra point made it 7-0 in favor of Whitley County.

Whitley County recovered a squib kick and quarterback Caleb Rose kept the ball on a read option play for a 30-yard touchdown. A bad snap on the extra point made the conversion attempt failed but in a flash the Colonels had gone ahead 13-0.

Facing fourth and 13, LCC quarterback Nick Sergent found receiver Sam Little on an out pattern but Little was tackled just short of the line to gain for a turnover on downs.

A seven play 70-yard drive ensure for Whitley County capped off by a six-yard touchdown run by Saylor to make the score 20-0.

LCC recovered an onside kick attempt to start their next possession near midfield. Hunter Campbell gained 12 yards on a sweep and was tackled late out of bounds to tack on 15 more yards to the play. Two plays later Jon Sergent took the handoff up the middle for a five-yard touchdown run. Zach Dollarhyde made the extra point to cut the deficit to 20-7 early in the second quarter.

Whitley County had a long sustained drive stopped when they fumbled a handoff exchange that the LCC defense pounced on at the LCC 18-yard line.

Sergent got flushed from the pocket and while rolling left threw a strike to Campbell for a 15-yard gain. Two plays later on third down and 11 yards to go, Campbell caught a wide receiver screen and cut between defenders for 17 yards. The drive stalled from there and LCC linebacker Jayson Buttrey sacked Rose to keep the score at 20-7 going into halftime.

The Colonels got the ball to start the second half and drove all the way down to the LCC 20-yard line before the defense stiffened and forced a turnover on downs. Campbell had consecutive runs of 15 yards then a personal foul penalty on Whitley County moved the ball down the Colonel 13-yard line. One play later Campbell took a toss sweep going left saw there was no room, stopped on a dime and reversed field and outran the entire defense for a touchdown. Dollarhides extra point sailed through the uprights to make it 20-14.

On the ensuing possession, Whitley County went for it on fourth and one and Rose was swallowed up by the LCC defense on a quarterback draw for a loss on the play. The Cougars then fumbled on their first offensive play to give the ball right back to Whitley County.

Neither offense could move the ball and the Cougars’ defense rose to the occasion once again to force consecutive Whitley County punts.

The Cougar offense had one last chance, this time starting a drive with less than two minutes left in the game. On third and eight, Sergent eluded a defender and scrambled for a 10-yard gain and got out of bounds to preserve what time was left in the game.

Sergent then found receiver Zach Hensley wide open on a crossing route for a 29-yard gain to the Whitley two-yard line. After getting stuffed on the first down play LCC had one more play to run and Campbell took the handoff on a sweep around the right side for the score. Dollarhyde made the all-important extra point to give LCC a 21-20 lead.

Jordan Adams then recovered an onside kick for LCC and Sergent had to kneel on one play to give the Cougars a miraculous 21-20 comeback victory.

After an 0-4 start to the season, the Cougars have won four of their last five games and hope to carry their momentum when they travel to Floyd Central next week for their last game of the regular season.

Hunter Campbell led the way for the LCC offense, carrying the ball 20 times for 124 yards and two touchdowns. Jon Sergent had 73 yards on 18 carries and a touchdown. Nick Sergent finished the game completing four passes on 10 attempts for 72 yards. But more importantly Sergent was clutch on the last drive, showing his senior leadership and clock management skills as LCC completed the comeback.

The defense was led by Jayson Buttrey, who had nine tackles and a sack. Sam Mullins set the edge all night and ended the contest with six tackles, as did Leyton Polly and Jon Sergent for a defense that kept LCC in the game and didn’t allow a point for the last three quarters.