Finishing 9-16 last season is something Kentucky coach John Calipari says was due to a variety of reasons, not just one particular shortcoming on his team or staff.

He insists his staff changes were not a reaction to the record but rather a chance for Tony Barbee to become a head coach at Central Michigan and Joel Justus to have more responsibilities at Arizona State.

He has admitted adding transfers Kellan Grady and CJ Frederick is part of a plan to space the floor more than UK was able to do last season due to its lack of outside shooting.

However, what may change the future of Kentucky basketball more than coaching changes or adding shooters, could be the upcoming name, image and likeness legislation that will allow student-athletes to make money off their names. Calipari knows with the popularity of Kentucky basketball it could be a game-changer for the UK program.

“Obviously, we have to wait to see exactly what the rules state. But no one should be able to do it better for men’s basketball than our program,” Calipari said. 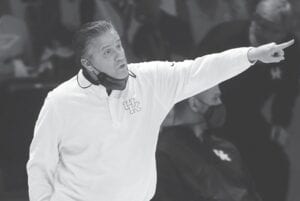 “Two years ago, TV-wise, our ratings before the pandemic would have ranked fourth in the NBA — Golden State, the Lakers, Cleveland with LeBron (James) — would have been above our ratings,” Calipari said. “So, all the social media stuff and all the stuff we do, and we can do, in my mind it should be the best in the country.”

Calipari said what he calls the “Kentucky Effect” already results in more shoe contract and endorsement money for former UK players in the NBA.

That’s why he says the name, image and likeness revenue for athletes should position Kentucky to combat money the G-League or other leagues trying to convince high school players to turn professional can offer.

“You may name a player that went to college, and I say to you if he went to one of the pro leagues, what would it have done for him? Now they say, ‘We’re going to build it.’ Well, I’m talking right now. Maybe in five years it’s different, but it isn’t right now,” Calipari said. 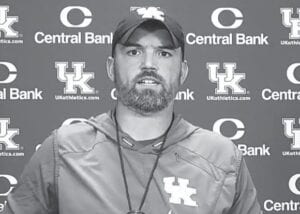 One SEC football coach says UK defensive coordinator Brad White is one of the best coordinators in the nation. (UK Athletics Photo)

“Yes, kids are going to do it. Yes, and I’m fine with it. There may be kids that I’ve encouraged to do it. But the others that want this, we’ll be fine.”

Calipari did admit Kentucky is often going to be recruiting the same high-level players that the G-League and others are going after now.

He also believes a return to normalcy will again give him a chance to show players how important Kentucky basketball is to fans across the state. He learned last year when UK could not do satellite camps across the state how much not being able to do those hurt the program.

“We’re going to take the team in groups to different parts of the state for some community work … I want these players to realize the impact that they have in our state,” Calipari said. “You understand that this is important to our state and it’s about bringing people together, doing things to make a difference for people’s lives, not trying to separate. The second piece of this is the camps — that we get the satellite camps. I never realized how it gave our kids a chance to touch other young kids and have them see their importance, but also to be able to get into different communities and see it.”

That’s another plus that Calipari says the Kentucky basketball program has that other programs do not and why he’s convinced last year’s fiasco will not be repeated.

“However it happens we will make it work,” Calipari said. “No one is hurt by sacrificing. Matter of fact, you are helped. I hope to get back to practices where NBA scouts are at practice. That brings up the level of practice. Let’s get back to who we are, what we are about.

“I may try some stuff (next year) and it doesn’t work. You pivot and move and try something else.”

Shooting was a big issue for Kentucky basketball last season, but John Calipari says he would like to play “four guys out, five guys out” next season which means he would need shooters.

Calipari rattled off the names of players such as Aaron and Andrew Harrison, Jamal Murray, Devin Booker, Doron Lamb and Immanuel Quickley, who could shoot the ball, while admitting he knew he left out others — Tyler Herro certainly comes to mind.

“I won’t sacrifice shooting for everything else,” Calipari said. “If you can’t guard and are a turnover machine, it’s hard to play here. The bottom line here is we are trying to win.

Athlon Sports is normally the first magazine to have its college football preview section finished and annually has a review of one Southeastern Conference team where opposing coaches can anonymously offer analysis on that team.

This year the team being analyzed was Kentucky and rival coaches had some interesting things to say about the Cats. Here are three of the quotes:

— “A really consistent program, maybe the most steady in our league. They’re smart recruiters, and they have a nice system in place.”

— “Brad White is one of the best coordinators around, and they could be pretty salty. This is their identity. They’re mean, physical, have a really smart secondary and a great pass rush. They’ll be as good on defense as they’ve been in Mark Stoops’s time there.”

— “Making the change on offense was a big deal for them. Eddie Gran ran a lot of ball control, simple stuff by design to accommodate the defense. They really live and die with the quarterback because they’re just solid but not great anywhere else. The new offense will have more play-action, more of the Rams’ offense; they’ll run a lot of outside zone and probably not as much between the tackles.”

Athlon predicts UK will finish 7-5 and place fourth in the SEC East behind Georgia, Florida and Missouri with a spot in the Liberty Bowl against West Virginia.

Quinton Bohanna has made a huge impression on the Dallas Cowboys in a short time after being picked in the sixth round. He’s being looked at as the run-stopper the Cowboys have been lacking in recent years.

Only three defensive linemen on the Cowboys are taller than the 6-4 Bohanna and none can match his weight of 327 pounds — which is still far less than he weighed for most of his UK career when he started 33 of 45 games.

Kentucky recruiting coordinator Vince Marrow believes if Bohanna had dropped weight earlier in his career he would have been a much higher draft pick.

“I was talking to NFL GMs (general managers) and scouts before the draft and a lot were asking me about Quinton,” Marrow said. “I really believe if he had gotten in shape earlier and looked the way he does now, he would have been a third-round pick.

“For that size to have that athleticism, that’s rare with how twitchy he is. The Cowboys really loved him. I wasn’t surprised they picked him.”

Bohanna never had more than 18 tackles in any season. He had just nine tackles for loss, three quarterback hurries, and two sacks in his 45 games. He did break up four passes.

What Bohanna helped do was clog the middle and enable other players to make tackles and that’s what the Cowboys want him to do.

“I would tell Bully to get your butt in shape,” Marrow said. “Bully is going to be a monster if he gets in shape. He can be just like Quinton.”

“That’s a name you better get used to hearing,” Marrow said. “JuTahn can play receiver or running back. He’s going to be on the field.”

Offensive coordinator Liam Coen has indicated he wants to find ways to get more than one running back on the field at the same time because of the depth of talent UK has at that position. He’s also said UK’s lack of playmakers at receiver could be offset by having running backs in position to catch balls.

McClain played in all 11 games as a true freshman in 2020 and had 16 carries for 62 yards and one kickoff return for 26 yards. He also played on special teams and had two tackles.

He was a four-star prospect out of Fairfield, Ohio, who was ranked as the No. 8 all-purpose back in his recruiting class by 247Sports. He rushed for 1,947 yards and 21 touchdowns his senior season. In three years he ran for 4,406 yards and 53 scores but also had 48 catches for 680 yards and seven scores.

“We probably have got the best running back (Chris Rodriguez) in the country on our roster,” Marrow said. “JuTahn is really challenging him. So just remember that name. He is going to be an impact player.”

“I would say I learned the most about how to be resilient. I have never lived through a pandemic. It was remarkable to see what we can do. I had to find places to work out and hit,” Johnson said. “Softball has always been a big commitment for me but in COVID I had to find ways to do things because there were so many restrictions.

“Our team as a whole, we were committed and never even quarantined. We showed UK softball was really great rules followers.”

Johnson hit .344, drove in 41 runs and stole 12 bases this season for Kentucky, which finished 43-16 after being eliminated last week in the Super Regionals by No. 3 Alabama. She played multiple positions for coach Rachel Lawson.

“We showed we have fight in us and never gave up,” Johnson said after the second Super Regional loss. “Alabama is a dominant team. I am so incredibly proud of our team. All season we played great softball. We always found ways to come back and score, that’s what I am most proud of.”

This could have been her final game but the Daviess County High School product will come back for a super senior season in 2022.

“I got accepted to graduate school at UK and will be playing another season and using my extra (COVID) year,” Johnson said. “We can use this moment to keep moving forward and prove that UK can play softball.”

Johnson thinks college softball teams are proving they are elite athletes and was thrilled to have ABC-TV air a Washington-Oklahoma Super Regional game won by No. 1 Oklahoma.

“I remember growing up, if I wanted to see a (college) softball game me and my dad had to drive to Lexington,” Johnson said. “Now little girls get to watch our games instead of having to drive hours to see a game. Now they are playing on ABC. That’s mind-blowing.”