DAMON JOHNSON founded the rock band Brother Cane before joining Alice Cooper and Thin Lizzy. Johnson, who also excels at singing and songwriting, will return to Whitesburg on May 10 for a show at Summit City.

This guide is published by The Mountain Eagle as a public service to help keep readers informed about entertainment events within driving distance of Letcher County. All dates are subject to change. Always check with the venues listed before traveling long distances.

BRIAN CAMPBELL; Fri., May 3 at Streetside Grill & Bar in Whitesburg.

THE TWANG BANGERS; Fri., May 17 at Streetside Grill & Bar in Whitesburg.

BUFFALO KILLERS; Sat., May 18 at Summit City in Whitesburg. 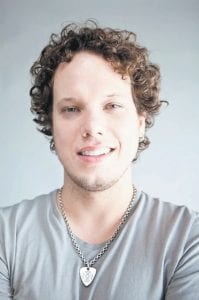 CHAD WARRIX cut his musical teeth on rock before switching to country music after moving to Nashville. The singer-songwriter from Breathitt County, Ky., had national success with the duo Halfway to Hazard before embarking on a solo career which brings him to Streetside Grill & Bar in Whitesburg on June 21.

STURGILL SIMPSON; Wed., May 29 at Summit City in Whitesburg.

LEON REDBONE; Sat., May 4 at The Altamont Theatre.

THE WALLFLOWERS; Tue., May 7 at The Orange Peel.

JOSH RITTER with THE FELICE BROTHERS; Mon., May 13 at The Orange Peel.

FATHER JOHN MISTY; Tue., May 14 at The Orange Peel.

HAYSEED DIXIE; Fri., May 24 at The Altamont Theatre.

JAMES McCARTNEY; Tue., May 28 at The Altamont Theatre.

PATTY GRIFFIN; Thu., May 30 at The Orange Peel.

CLINT BLACK; Fri., May 17 at Paramount Center for the Arts.

LUCERO; Thu., May 2 at Southgate House Revival in Newport, Ky.

THE LUMINEERS; Sat., May 4 at PNC Pavilion at Riverbend Music Center.

KILLSWITCH ENGAGE with AS I LAY DYING and others; Mon., June 17 at Bogart’s.

THE GUESS WHO; Thu., July 11 at Fraze Pavilion.

THE HAPPY TOGETHER TOUR featuring The Turtles, Gary Lewis & The Playboys, Mark Lindsay, Gary Puckett & The Union Gap and CHUCK NEGRON; Wed., Aug. 7 at Fraze Pavilion for the Performing Arts in Kettering, O., near Cincinnati.

DEAD CONFEDERATE with ROADKILL GHOST CHOIR; Wed., May 15 at The Bowery.

THE AVETT BROTHERS; Thu., May 16 at Knoxville Coliseum.

THE WHIGS with DRIVN’ N’ CRYIN’; Thu., May 16 at Headliners Music Hall.

DEADSTRING BROTHERS with FIFTH ON THE FLOOR; Fri., June 21 at Uncle Slayton’s.

BRUNO MARS with FITZ AND THE TANTRUMS; Sun., Aug. 18 at KFC Yum! Center.