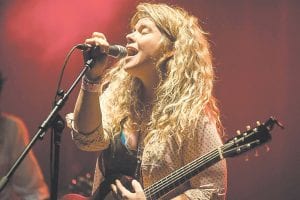 IN WHITESBURG FRIDAY — Amber Farris is the lead singer for the blues-rock band Somebody’s Darling. The Nashville-via-Texas band is scheduled for an in-store performance at Roundabout Music Company in Whitesburg at 2 p.m. on Friday, followed by a full concert later Friday night at Summit City, also in Whitesburg.

This guide is published by The Mountain Eagle as a public service to help keep readers informed about entertainment events within driving distance of Letcher County. All dates are subject to change. Always check with the venues listed before traveling long distances.

THE TEMPERANCE MOVEMENT (blues rock band from Great Britain, who will be taking a break from their tour with Blackberry Smoke); Tue., March 17 at Summit City in Whitesburg. Admission, $12. 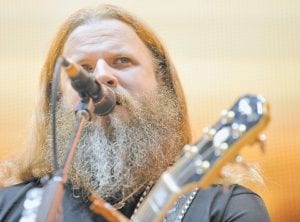 MARSHALL CRENSHAW with THE BOTTLE ROCKETS; Sun., March 8 at The Grey Eagle.

DIE ANTWOOD; Mon., March 23 at The Orange Peel. SOLD OUT.

SYLVAN ESSO; Thu., April 2 at The Orange Peel. SOLD OUT.

THE MOUNTAIN GOATS; Fri., April 3 at The Grey Eagle.

BETWEEN THE BURIED AND ME; Sun., April 5 at The Orange Peel.

MARTIN SEXTON; Sat., May 16 at The Orange Peel.

HACKENSAW BOYS; Sat., May 23 at The Grey Eagle.

HARRY CONNICK JR.; Thu., Feb. 26 at Clay Center for The Arts and Sciences.

GEORGE THOROGOOD & THE DESTROYERS; Sat., March 21 at Clay Center for The Arts and Sciences.

CITIZEN COPE; Wed., April 8 at Clay Center for The Arts and Sciences.

BLUES TRAVELER; Fri., May 15 at Clay Center for The Arts and Sciences.

ARETHA FRANKLIN; Sun., May 17 at Clay Center for The Arts and Sciences.

KATHY GRIFFIN; Thu., June 4 at Clay Center for The Arts and Sciences.

ROCK OF THE ‘ 80s TOUR featuring THE ROMANTICS, THE SMITHEREENS and TOMMY TUTONE; Sat., March 14 in Florence, Ind., at Belterra Casino Resort and Spa.

ASLEEP AT THE WHEEL; Sun., March 22 at Taft Theatre.

THE WAR ON DRUGS; Tue., March 31 at Bijou Theatre.

SLIPKNOT with HATEBREED; Tue., May 5 at Knoxville Coliseum.

AUDRA McDONALD; Thu., March 12 at EKU Center for the Arts in Richmond.

ROSANNE CASH; Sat., April 25 at EKU Center for the Arts in Richmond.

KATHY GRIFFIN; Fri., May 15 at EKU Center for the Arts in Richmond.

RON WHITE; Thu., NOv. 5 at EKU Center for the Arts in Richmond.

NEEDTOBREATHE with BEN RECTOR, DREW HOLCOMB & THE NEIGHBORS with COLONY HOUSE; Wed., May 6 at Iroquois Amphitheater.

GEORGE CLINTON AND PARLIAMENT FUNKADELIC; Thu., May 7 at Mercury Ballroom.

SOUTHERN CULTURE ON THE SKIDS; Fri., May 8 at Headliners Music Hall.

THE WHO with JOAN JETT & THE BLACKHEARTS; Sat., May 9 at KFC Yum! Center.

PARAMORE; Tue., May 12 at Louisville Palace.

DEATH CAB FOR CUTIE; Tue., May 12 at Iroquois Amphitheater.

NEW KIDS ON THE BLOCK with TLC and NELLY; Sun., June 7 at KFC Yum! Center.