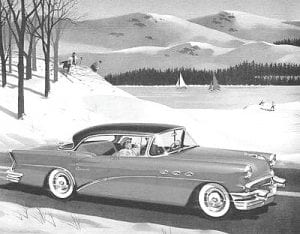 This week in 1954, Buick Motors general manager Ivan L. Wiles announced the arrival of what he called the automobile industry’s latest sensation, a four-door “hardtop” sedan. Pictured here is an advertisement touting the fourdoor Buick Special Riviera, which would begin production early in 1955. The four-door model eliminated the center posts between the doors. The four-door hardtop was also offered in the Century series offered by Buick.