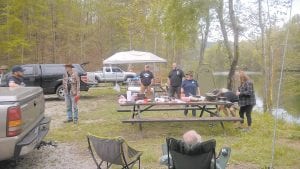 The county turned over the development of the lake, formerly run by the county recreation committee, to the tourism commission last month, and the commission is gearing up to make it more of an attraction to people from outside the county.

Money for the majority of the work is at least a year away, but Tourism Commission Chairwoman Missy Matthews said that doesn’t mean nothing will be done.

“We’re not going to wait that long,” Matthews said Monday night at a public meeting on a $250,000 grant application the commission is planning to submit.

Wooden decks like those already built on Pine Mountain will be built this summer overlooking the lake behind the RV park area, and the commission has asked Kentucky Power Company to look at moving overhead lines so they don’t cross camp sites.

The commission is seeking a Land and Water Conservation Grant for the lake, and expects that could be used in part for moving the lines. The commission also plans to build a “country store” at the lake that would carry items such as ice, toiletries and fishing bait so campers can buy last-minute needs.

Chris Riffe of Thornton, who runs a YouTube channel called The Kentucky Woodsman, thanked the commission for its work, and told the commission about a meet-up of woodsmen and bushcrafters at the lake that he has hosted for the past two years. The latest event, which ran April 26-28, brought people from Florida, Georgia, Tennessee and all over Kentucky who came to learn outdoor skills and enjoy nature. Many of those who attended run YouTube channels of their own, Instagram sites and Facebook pages dedicated to the outdoors and their travels, and are featuring the event at Fishpond in some of their photos and videos.

“If you go to YouTube, you go to Facebook, there is so much positive press out there,” Riffe said.

That said, Riffe said some of the people were upset by pricing for camping at the lake, which includes a base rate plus $5 per person if more than four people stay at an RV site. Riffe said his group didn’t have to pay for camping in the old Boy Scout Camp, which does not have RV hookups, and would like to keep it that way.

Jessica Howard, volunteer tourism director, said she has never camped out, but did check prices at surrounding campgrounds and priced the sites at less than what’s charged in other counties. The $5 fee for additional people is to pay for extra water, electricity and dumping, she said.

Matthews said it costs $15 to dump sewage, and if the county only gets $20 for a site, the county would end up losing money.

Two of the people who attended the event over the weekend, Dan and Brenda Cordray, stayed two extra days so they could attend the tourism meeting, and talk to the commission about it. The Cordrays, who are retired, are originally from central Kentucky. Brenda has spent the past six years living on the road, and she and Dan married last year. The two live in a converted senior citizens van and travel the country, staying in campgrounds and often in shopping center parking lots when campgrounds aren’t available. They have a home in Arizona where they spend a couple of months a year, but the rest of their time is spent traveling, camping, and posting videos of their travels to YouTube.

Dan Cordray urged the commission to think about lower prices for the RV sites as an investment to get people to come here and spend money other places in the county. He said the two come to Letcher County about twice a year, and this time spent about $350 on food, gas, and other necessities between Thursday night and Monday night.

“We actually could pay for camp sites every night, but we would have to cut our budget somewhere else,” Brenda Cordray said.

They said their van and utility trailer, which contain a recording studio, are like many today — self-contained and solar powered so they have no need for electricity or water hookups. It wouldn’t make sense, they said, to pay for an RV site or to pay a large sum for a primitive site, when they don’t use any utilities.

Matthews said primitive sites will continue to be free, but the commission will have to charge for the RV sites and for raised camping sites it’s planning to build at the lake.

She asked the Cordrays, who drove from Arizona to be at the weekend campout, several questions about their views on what needs to be done at the lake to improve it, and took suggestions from others at the meeting as well.

Riffe suggested a scuba facility, which he said had been approved once but never actually done, something Matthews said she had never thought of.

Among the things the tourism commission is planning are a store near the dam that will provide a basic selection of things campers might need, showers and a laundry room. Restrooms, which are in bad repair, will also either be fixed, or razed and replaced.

Bridget Back, who is married to Deputy Judge Jason Back, is writing the application for the Land and Water Conservation Grant. She said she has already written a grant for picnic tables that are made from recyclable tires, and those will be installed at the lake.