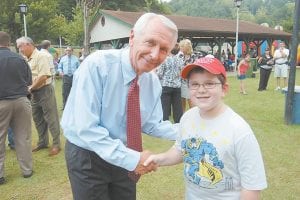 FUTURE WORKER? — Nine-year-old Jake Sparkman met Gov. Steve Beshear at the Jenkins City Park on June 23 before the beginning of a groundbreaking ceremony for the Canadian company, Ferus Corp., which will build a $30.8 million liquid nitrogen plant at Gateway Industrial Park. Jake, who will be a fourth-grade student at West Whitesburg Elementary School, is the son of Dena and Duran Sparkman. (Photo by Sally Barto)

Looking for a new job with good benefits and a chance to go to Canada for training?

If you answered yes, you need to start paying attention to help wanted ads for Ferus Inc., a Canadian company which is building liquid nitrogen plant in Letcher County.

Joe Ladouceur, vice president external affairs and treasurer of Ferus, said during a visit to Jenkins last week that the company would like to hire Letcher County residents to fill 34 job positions to be filled after Ferus finishes its $30.8 million facility at the Gateway Industrial Park near Jenkins.

Truck drivers, dispatchers and mechanics will be needed as well people to fill as technical, operational, administrative and management positions.

“Some of the work that Ferus does is very specific to the liquid nitrogen business for handling liquid nitrogen — how you put it in a trailer, how you move it and put it into a customer storage,” said Ladouceur. “So those are the kind of things where people will need some specific training. We will bring them to Canada. They can see our operation, see how it is done and we will bring them back out here and they will be ready to go.” 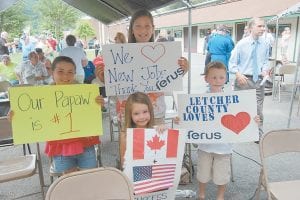 ECONOMIC DEVELOPMENT FANS — Amelia Wilson, Abigale Wilson, Kade Minton and Maggie Minton held signs in support of their grandfather, Joe DePriest, who is the director of Letcher County Economic Development. DePriest spoke at a groundbreaking ceremony for Ferus Corp. at Jenkins City Park on June 23. DePriest is president of the Letcher County Chamber of Commerce and his wife, Brenda, is secretary and treasurer.

Ladouceur said Ferus Corp. will begin its job recruitment process in the fall.

“I want to especially thank Ferus Inc. for locating here in Letcher County to help provide job opportunities and I want to thank them for being good jobs with good benefits and good salaries,” said State Sen. Johnny Ray Turner. “That’s what this county needs. That’s what Kentucky needs.”

Ladouceur, along with Gov. Steve Beshear and Richard Brown, president and CEO of Ferus Corp., were at the Jenkins City Park June 23 to announce Ferus Corp.’s decision to build a liquid nitrogen facility, which will be capable of producing up to 200 tons of liquid nitrogen per day. 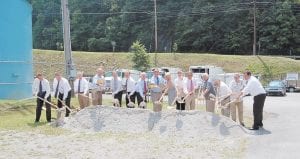 “Now this product will be delivered to plant storage, to customer yards or directly to well sites depending on the customer’s needs,” said Beshear. “We find it especially exciting because diversifying Kentucky’s energy production was a major part of the comprehensive strategy that we put together about a year and a half ago.”

Beshear, who spoke during a groundbreaking ceremony hosted by the Letcher County Chamber of Commerce, said Ferus is a company known for its innovative work in the energy industry including areas like well stimulation, well completion and enhanced oil recovery.

Ladouceur said the new plant will provide liquid nitrogen to the energy entities in the region and support the ever-growing gas business.

“This is truly an historic day for our company,” said Ladouceur. “I can tell you that Ferus has been planning an expansion of operations into the United States for a very long time now and we are very delighted that day has finally arrived. And I also wanted to assure you as part of the announcement today that this is just the beginning. We have plans to continue to expand to build more plants, to hire more people and to create more jobs and we are very excited about it.”

The plant is expected to be operational by the end of 2011.

“We’ve got a new company coming that is going to make their home here and create good jobs for us and bring new vitalization to our economy,” State Rep. Leslie Combs. “While coal has always been and will always continue to be our first and foremost resource, we are so glad to be able to diversify in another way because it in the long run will make coal better.”

“We knew that energy needed a whole lot of liquid carbon dioxide and liquid nitrogen,” said Brown. “And we knew that it was usually coming from very long distances away. The other thing we knew was that it required a very large and complicated infrastructure and transport, so we simply just set out to serve the energy industry with pyrogenics. We got the trucks we needed. We built the plants.”

Ladouceur said about a decade ago Brown envisioned the creation of a pyrogenics company that exclusively served the energy industry.

“Taking on the industrial gas giants that were located in Canada was an impossible undertaking, but Dick was either too bold or too stubborn or too naive or too dumb to know that he couldn’t do it so he did it anyway,” said Ladouceur. “Starting off with three employees in one office with nothing but good ideas. Ten years later Ferus has over 200 employee, six plants, 10 locations and limitless possibilities.”

Brown said Ferus Corp. is the number one pyrogenics provider for the energy industry in Canada because of its dedicated staff and customer base.

He said members of his staff have been conducting research for the past year and a half to learn how gas companies work in eastern Kentucky.

“We have been very diligent to try to understand the gas industry here, making sure we are setting ourselves up for success,” said Brown. “We found out some very important things like the massive volumes of natural gas that are in and around this area. We also discovered that the liquid nitrogen that is used in completing so many of these wells can come from very far away, oftentimes over 300 miles from Ohio.”

Through the Kentucky Business Investment program, the Kentucky Economic Development Finance Authority (KEDFA) preliminarily approved Ferus Corp. for tax incentives up to $2 million, which can be earned over a 15-year period through wage assessments and corporate income tax credits. Ferus Corp. is also approved by KEDFA for tax benefits up to $192,000 through the Kentucky Enterprise Initiative Act.

“With economic incentives, tax incentives and with the way that Kentucky has structured their programs for recruitment and training, we are entering into an area that is not just open for business but indeed encouraging business,” said Brown.

“Last summer, folks, in a special session we totally revised our economic incentive programs and because of that revision we are standing here today celebrating this victory,” said Beshear. “I cannot take complete credit for those new programs. The legislature worked with me.”

Beshear said in a time when every job is sacred and every economic investment is a cause to celebrate, Kentucky is being very aggressive to make sure that every opportunity is taken advantage of to secure good jobs.

“In these difficult economic times, we cannot just sit idly by and wait for things to happen,” said Beshear. “We’ve got to take matters into our own hands and that is exactly what we have done. Because we did that and because the local officials here came together, it is proof positive that these programs work and they’ll continue working for you here in Letcher County, for eastern Kentucky, indeed for everybody around Kentucky.”

Brown said he isn’t naïve enough to think that the governor has taken his time and all of the state and county representatives attended the ceremony just to welcome Ferus.

“They are here out of a profound respect for the citizens of Kentucky and for the care they want to show you,” said Brown. “I can’t ask for a better environment than that, to be trying to establish a new business.

Brown said as Ferus Corp. participates in the county during the upcoming years, the company will strive to be worthy of everyone in the community’s recognition.

“At Ferus we absolutely value the opportunity to get involved in the community,” said Ladouceur. “We take a great deal of pride in our focus on people we encounter in our day-to-day business. We very much look forward to becoming involved and interacting with this part of Appalachia and eastern Kentucky. We are particularly grateful to the help, support and acceptance.”

Ladouceur said he and others at Ferus Corp. look forward to a very prosperous relationship for many years to come.

The Appalachian Industrial Authority is the governing body of the Gateway Industrial Park. That authority represents Knott, Letcher, Floyd and Pike counties.