Commendation for Everett B. Vanover 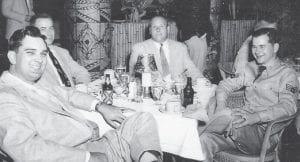 The photo accompanying this article was taken at Hickam Field, Hawaii, NCO Club. We were assigned to the Headquarters Pacific Division (PACD) that commanded all Air Force bases in the Pacific theater.

We were celebrating my first of three Air Force commendation awards presented to me earlier at the base theater by our commander, Admiral Williamson, for the outstanding work I did during the four years of war in Korea.

My second award was in Germany, and my third was at the Pentagon, presented to me by President Nixon when I retired, December 1, 1972, along with other awards.