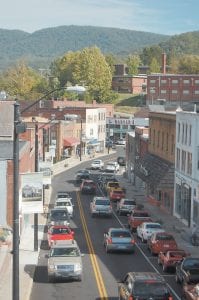 This view of downtown Whitesburg was taken last week from the bucket of a fire truck as members of the Whitesburg Fire Department hung new banners on Main Street. The banners depict diff erent landmarks located in Letcher County.

The Letcher County Tourism Commission and the Mountain Heritage Festival Committee have worked together to identify at least 85 landmarks in Letcher County that are around 100 years old.

Thirty-six of the landmarks are featured on new banners that are on display in downtown Whitesburg. The landmarks, including churches, residences, schools, businesses and a bridge, will be featured in a book called “Letcher County Landmarks”, which will be published in the next few months.

“It’s going to be a book with a lot of color photos,” said David Narramore, chairperson of the Letcher County Tourism Commission. “We were trying to identify historical landmarks before they no longer exist.”

Narramore said the book will contain detailed information and geographic guides so people can easily find the landmarks. Narramore wants the book to stimulate interest in people to visit these places.

Connie Fields, a member of the Mountain Heritage Festival Committee, took the photos that appear on the banners and took some of the photos that will appear in the book. LeeAnna Mullins, chairperson of the Mountain Heritage Festival Committee, researched the dates of the historic structures and verified the content through research. Mullins obtained historic photos and conducted oral history interviews. 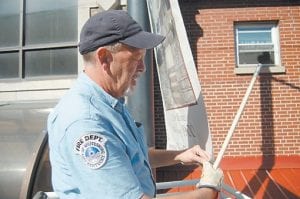 Assistant Whitesburg Fire Chief Perry Fowler placed a new banner on a pole on Main Street last week. The project is a joint effort by the Letcher County Tourism Commission and the Mountain Heritage Festival Committee. LeeAnna Mullins, chairperson of the Mountain Heritage Festival Committee, said the goal is that next year communities can borrow the banners to use during the diff erent festivals. (Photos by Sally Barto)

The landmarks to be featured in the book are:

• Eolia Cabin on the Underground Railroad (1818)

• Mine Manager’s Lakeside Residence in Jenkins (1914)