Commodores were no match for Cougars 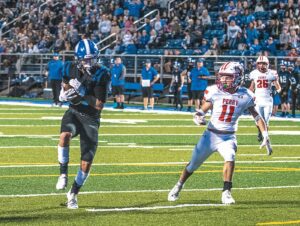 Letcher Central’s Wyatt Ison hauls in a pass from quarterback Carson Adams and would easily score in the Cougars’ rout of Perry Central last Friday. The Cougars jumped out to an early lead and never looked back in the 42-6 win. (Photo by Chris Anderson)

Letcher County Central High School’s football team won its first district game of the season in convincing fashion over visiting Perry Central, 42-6. The Cougars offensive and defensive lines controlled both lines of scrimmage as LCC improved to 5-1 on the season.

Letcher Central received the opening kickoff and wasted no time scoring. Quarterback Carson Adams gained 31-yards on a quarterback keeper to begin the drive. Then, Jonah Little came in motion and took a handoff for a 30-yard touchdown run. Little also made the extra point to give the Cougars a 7-0 lead.

On Perry Central’s second offensive play, a fumbled handoff exchange was scooped up by LCC lineman Jackson Meade who rumbled down the field for a 46-yard touchdown return to increase the lead to 14-0 after the extra point was again good.

The LCC defense forced a threeand out to give the ball right back to the offense after the punt was downed deep in Cougar territory.

Adams gave the Cougars some breathing room with a 28-yard scramble to start the drive. Little then took a handoff in motion once again and gained 25-yards. An 18-yard pass from Adams to receiver Alex Blair led to a 31-yard touchdown pass on a seam route to Wyatt Ison to make it 21-0 with 5:16 left in the first quarter.

After punts by both teams, Perry Central used a seven-play drive to move the ball deep into LCC territory. On first down and 10 at the LCC 16-yard line linebacker Keaton Day forced a fumble that was recovered once again by Meade. The Cougar offense went three and out after that, but the punt was muffed and recovered by Quentin Williams. LCC took advantage of that miscue with a beautifully thrown deep ball from Adams to Little for a 38-yard touchdown, making the score 28-0 at halftime.

The Commodores received the second half kickoff and went on a 16-play 60-yard drive which took almost nine minutes off the clock and was capped off by a five-yard touchdown run up the middle to cut the lead to 28-6.

With LCC now back in possession, Adams started a drive by gaining 12 yards on a draw play. Two plays later, Little took a handoff and was aided by a pancake block on the edge by Nicholas Haning to score from 37-yards away. The Cougars had regained momentum and upped their lead to 35-6.

After the Cougar defense forced yet another punt, Adams connected with Little for a 34-yard gain which was followed three plays later by a 15-yard touchdown run by Hayden Brashear. The extra point made it 42-6 and forced a running clock for the remainder of the game.

The Commodores had one more 10-play drive that LCC eventually stopped after a turnover on downs to make final score 42-6.

The Cougar defense also had an impressive outing, holding Perry Central to 188 yards of total offense. Keaton Day led LCC with 13 tackles and a forced fumble. Kaden Barnette had 10 tackles and a sack. Koby Johnson and Cooper Bailey had eight and seven tackles, respectively. Jackson Meade had two fumble recoveries, including a touchdown return.

LCC will look to improve to 2-0 in district play when they travel to Harlan County this Friday. Kickoff is set for 7:30 p.m.