Company chooses Letcher girl as model for its latest ‘hangtag’ 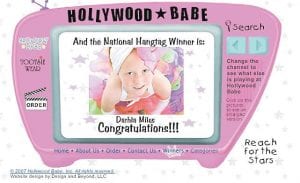 A seven-year-old Letcher County girl is the “National Hangtag Winner” for a California company that specializes in unique clothing for young girls.

Hollywood Babe Inc. announced last week that Darhla Shadell Miles, daughter of Avery and Angela Mullins of Premium, was chosen to have her photograph appear on the company’s hangtags, which are small slips of paper attached to an item being sold giving information about its composition and proper care.

Darhla, a second-grade student at Letcher Elementary School, was chosen from a photograph her mother submitted to the “Hollywood Babe Inc. Hangtag Contest.” The photo was taken by Trey Narramore of Narramore Photography at Ermine, and showed Darhla wearing an outfit sold by Hollywood Babe.

“I saw that outfit and had to have a picture of her in it,” said Angela Miles, Darhla’s mother.

Angela Mullins said she has been buying Darhla clothing from Hollywood Babe for about five years.

In addition to having her photo hang from Hollywood Babe Inc. clothing, Darhla will receive a director’s chair and 500 hangtags to give to friends.

Mullins said her daughter was happy when she found out she had won the contest.

“We were both so excited,” said Angela Mullins.

Hollywood Babe Inc. is a clothing company based in Covina, Calif., about 20 miles east of Los Angeles, that specializes in pageant apparel and unique seasonal outfits. Darhla used to compete in local pageants but hasn’t in the last few years.

Darhla has one brother, Dustin. She is the granddaughter of Eugene and Shirley Collins of Sandlick and Joyce Vermillion of Whitesburg.

Her prize-winning photo can be seen on the Hollywood Babe Inc. website at www.hollywoodbabetv.com.