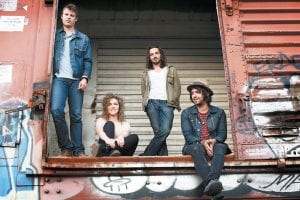 Chicago band Company of Thieves, now touring the U.S. in support of their new album, Running From a Gamble, will headline a concert at Summit City in Whitesburg on Friday night. The show is scheduled to begin at 9 p.m.

The Chicago band Company of Thieves is returning to Summit City in Whitesburg — this time as a headliner.

Just a few weeks after opening here for The Whigs, vocalist Genevieve Schatz, guitarist Marc Walloch and fellow band members Chris Faller (bass) and Marcin Sulewski (drums) will perform at Summit City on Friday (June 17) in support of their second album, Running From a Gamble, which was released May 17.

Schatz and Walloch have been writing songs and performing together since they met while teenagers at a Chicago train station. Company of Thieves’ first album, Ordinary Riches, was originally released in 2007, then re-released in 2009 on Wind-Up records. Produced by Sean O’Keefe, who is known for his work with Fall Out Boy, the album featured the song “Oscar Wilde,” which was featured in a Dove soap commercial and on an episode of TV’s “Gossip Girl.” The song also won a New York Songwriters Circle contest.

In a May 26 review of Running From a Gamble, critic Thomas Conner of the Chicago Sun-Times said Schatz has “the lungs of Johnette Napolitano (Concrete Blonde) and the lilt of Delores O’Riordan (the Cranberries).”

Those who attended Company of Thieves’ Whitesburg performance with The Whigs will agree with Conner’s description of Schatz as “a dynamo on record and on stage belting in front of this basic but bold rock band.” Conner said the album also finds Walloch “working overtime picking out spidery melodies and bashing riffs.”

The new album covers a wide range of sounds from the rockers “Queen of Hearts” and “Modern Waste” to the Motown-influenced and perhaps the band’s best song “Tallulah.”

“We’re influenced by a lot of different artists,” Schatz adds. “Everything from jazz and Motown to Billie Holiday and the Beatles. Seeing how they expressed themselves helped us to figure out another way to express ourselves in music.”

In addition to The Whigs, Company of Thieves have toured with OK Go and The Hold Steady, performed at the rock festivals Lollapalooza and Mountain Jam, and appeared on “Last Call with Carson Daly.”