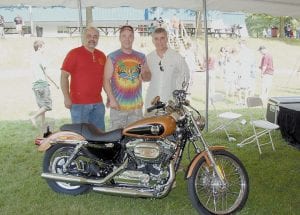 TOP PRIZE – Sapphire Coal Company miner Craig Abbinanti (center) posed with company president John L. Cline Jr. (left) and United Coal president and CEO Mike Zervos (right) at Isom Saturday after Abbinanti won this new Harley-Davidson motorcycle that was given away as a door prize as part of Sapphire Coal’s employee appreciation day. The Whitesburg-based company is a subsidiary of United Coal, based in Bristol, Va. 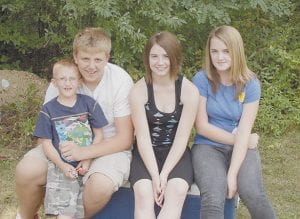 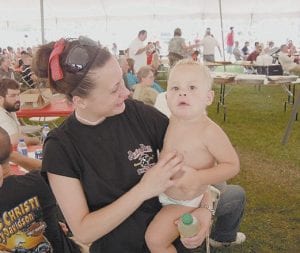 Micah Smith and her 19-month-old son, Laken Johnston, watched the festivities at Sapphire Coal Company’s employee appreciation day from under a large tent. They are the daughter and grandson of former Letcher County Judge Carroll Smith, who now works underground as an electrician at Sapphire. 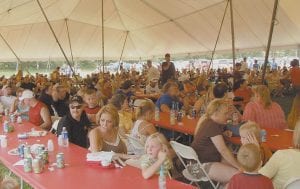 Sapphire Coal employees and their families were waiting near the end of a long and hot day to see if they won one of several door prizes given away. The employee appreciation day was held at the company’s offices at Isom.