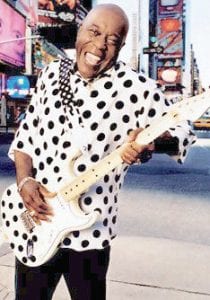 Our friend, Rita Ibershoof, who, to the best of my knowledge had never won a raffle of any kind anywhere in her life even though she’s a sucker for every seller of chances who has ever presented her with a ticket offer, called me up last Tuesday night.

To say that she was excited would be a huge understatement. However, she had called a local radio station that was simultaneously promoting several big concerts, one of those deals where the umpteenth caller gets four free tickets and Rita had her heart set on seeing Allison Krause. So when they answered the phone there at the station and told her she’d won, it took like three minutes for the shock to wear off and then they told her the tickets were for the Elk Creek Vineyard’s Blues Festival in backwoods Owen County, headlined by Buddy Guy, last Saturday night.

That hardly dampened Rita’s spirits even though she knew she already had plans to be in Indiana for the weekend. She might have canceled for Allison. On the other hand she had, by golly finally won something after decades of steadfast effort and no way in the world was she not going to collect! She could think of nobody else in the world that she’d rather give the tickets to than Loretta and me.

Loretta explained that we had overnight bags sitting by the front door so we could meet daughter Jennifer at the hospital to participate in the delivery grandson number four who is scheduled to come screaming into this world at any minute. We’ve already had two false alarms on that front but I don’t want to get off the subject except that it’s likely the third time will be charm.

Bottom line is that Rita express mailed the tickets to us and we couldn’t find anyone who wanted to go see Buddy Guy with us or by themselves. Jennifer convinced us that we’d be about as close to the hospital in Owen County as we are in Paint Lick, that baby wasn’t going to arrive within the next several hours anyway, that she’d call the cell phone if the situation changed and for us to get on up to the backwoods and sing the blues.

She was so disgusted with the false alarms that she and hubby, Kevin Ochs, were planning on going out on one last pre-delivery date themselves.

In the spirit of what a shame it would be to let those tickets go to waste, Lo and I decided at 2:30 p.m. to go to a concert 100 miles away that was scheduled to start at 5 p.m. We figured on giving the two extra tickets away to somebody standing in line at the general admission gate. But, as it turned out, that didn’t happen. Simply put, there was no line and nobody waiting to get in. The music had begun.

Sonny Moorman, no slouch with a blues guitar himself, was on stage. He was followed by Room Full of Blues and they were mighty fine. Then, just before 8:00, Buddy hit the stage and within seconds every person in the little valley, I’m guessing about 2,000 fans, were on their feet and we all remained standing for the next hour and a half.

Buddy Guy is in his early 70s but I’m telling you that there was not a soul on the premises with more energy. And I can count on fingers of one hand the number of times that I’ve felt that I was in the presence of that much greatness. He touched on Eric Clapton, John Lee Hooker, Muddy Waters and several other great blues guitarists, but he mostly applied his own style.

Lo and I are much bigger blues fans now than we were before Saturday night. Let me simply say that I have never heard nor ever expect to hear again a finer rendition of “Mustang Sally.”

However, on the way out, with hundreds of people walking by, some goobers began setting of fireworks. Serious, big-time, very loud fireworks like the kind you see on the Fourth of July celebrations at name your favorite city park. Said fireworks were not supervised by any fire department and they were exploding directly over our heads.

Ashes and residue rained down on us and suddenly a bomb that failed to properly launch landed right beside the path. Had Loretta been a few feet closer she would be blind or much, much worse now. Somehow she managed to get her hands over her ears in the nick of time or she’d be deaf.

As it happened she took a small piece of shrapnel to the arm and a bigger piece slammed into her behind. Enough of us were cursing the morons engaged in arguably the most blatant example of public stupidity I’ve ever witnessed, that they stopped. They didn’t offer any assistance but they did have enough sense not to cuss back.

Back atop the hill at winery headquarters, we rushed into the ladies’ room where I could inspect her bottom. Thank heaven there were no women with their pants down and the only occupant, a young lady applying lipstick, didn’t register the slightest bit of shock that a man had come charging in. Maybe that happens more often than I realize.

Lo wasn’t bleeding but she had a large red welt that, at this writing, has changed into a fairly ugly bruise on the right cheek of her behind.

We registered a complaint with a cashier but no managers were around and Loretta was in no mood to stick around and wait for them. I honestly never expected to hear about the matter again, but someone called her today with profuse apologies while acknowledging that the fireworks were not planned very well and that they were glad she was not injured more seriously. They offered her free tickets to the next gig, or the next one of her choosing. So I guess we’re going back.

As I said before, Elk Creek Vineyards is a tad off the beaten path but it’s a jewel when you finally get there. However, if you go and they commence setting off fireworks, run like hell for cover.