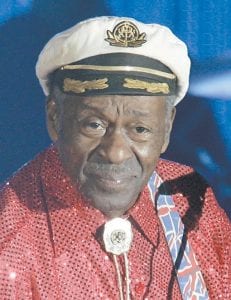 Chuck Berry, known as “The Father of Rock-and-Roll,” wore his famous cap and a red shirt during Saturday’s show in Chicago. (AP photo)

Chuck Berry, who fell ill with exhaustion and had to be helped from the stage during a Chicago concert over the weekend, was back at his home in suburban St. Louis this week and looking forward to his next performance, a close friend of the “Father of Rock-and-Roll” said.

Berry, 84, was performing before a sold-out Congress Theater crowd of more than 3,700 when he collapsed and had to be helped off the stage. Berry’s friend, Joe Edwards, said he appears to have fully recovered.

“I think it was just exhaustion,” Edwards said, noting that Berry played two shows at B.B. King’s Blues Club in New York on New Year’s Eve, then flew to Chicago where he played at the Congress Theater on Saturday night.

“I think by the time the concert in Chicago got near the end he just got tired,” he said.

Berry’s agent, Dick Alen, said in an e-mail to The Associated Press that the singer “feels tired but good.”

Edwards said Berry returned to his home in Wentzville, Mo., on Sunday afternoon, and that he is feeling well enough to prepare for a Jan. 19 concert at Blueberry Hill in University City, Mo. Berry has performed monthly concerts at the popular bar and restaurant that Edwards owns since 1996.

“He’s in great shape,” Edwards said of the singer of early rock classics such as “Johnny B. Goode,” ‘’Sweet Little Sixteen” and “Roll Over Beethoven.”

“He’s very healthy. He doesn’t smoke or drink. He cuts his own grass,” Edwards said.

A man who attended the Chicago concert said Berry gave an erratic, out-of-tune performance before he was helped offstage. After a few minutes he came back, thanked the crowd and gave a brief description of what happened, then did a few steps of his famous “duck walk” before calling it a night.

While many patrons who attended

Saturday’s show were shocked that Berry was playing so badly out of tune and speaking most of the words to the few songs he was able to perform, no one booed. In fact, the crowd which included a surprising number of young hipsters applauded politely when it became obvious Berry could go no longer.

Berry spent much of the show criticizing the three accomplished Chicago musicians who were hired as his backup band. He took over playing the keyboards twice during the abbreviated show, finally lying his head across the keys shortly after sitting down for the second time.

Berry grew up in St. Louis. In December 2008, the modest onestory red-brick home where he lived for eight years in the 1950s, as his fame began to soar, was added to the National Register of Historic Places.

Edwards has called Berry St. Louis’ greatest worldwide ambassador, noting that his music has influenced acts from the Beatles to Bruce Springsteen. Rolling Stones guitarist and songwriter Keith Richards has said that Berry is the most important figure in rock history.

Berry still sings, plays guitar and performs the duck walk during his performances, despite his advancing years. Edwards said the shows at Blueberry Hill — named the Duck Room for Berry — sell out every month with visitors coming from around the world to see him perform.

When Berry’s friend and collaborator Johnnie Johnson — the inspiration for “Johnny B. Goode” — died in 2005, Berry told reporters he would miss his friend but wasn’t melancholy.

“My turn is coming very soon,” Berry said at the time. “Would you shed a tear for Chuck? I hope not, because I don’t see why one should weep when something inevitable must come.”

Berry was among the first 16 musicians inducted into the Rock and Roll Hall of Fame in Cleveland in 1986. Other inductees that year included Elvis Presley, Jerry Lee Lewis, Ray Charles, James Brown, Sam Cooke, Little Richard, Robert Johnson, and the Everly Brothers.

“While no individual can be said to have invented rock and roll, Chuck Berry comes the closest of any single figure to being the one who put all the essential pieces together,” says Berry’s biography at the Hall of Fame. Many observers fear that Saturday’s appearance may be the last Berry will make away from his Blueberry Hill club.

“He tried to give it his all,” the promoter of the Chicago show, Michael Petryshyn, told the Chicago Sun-Times. “He definitely put a scare into a lot of people. The age variation of that show was all over the place; you had parents with kids, parents taking their parents and the whole rockabilly crowd. People who stayed until the very end appreciated they had an intimate moment with Chuck. For him to do his duck walk before he went off stage the last time will be a lasting impression for anyone who saw it.”

Compiled from AP and staff reports.