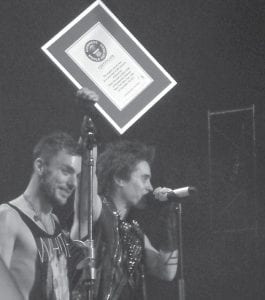 Jared Leto (right) held up honor from Guinness Book of World Records while brother Shannon Leto looked on. Both are members of the Los Angeles hard rock band 30 Seconds to Mars.

As the lights of the Hammerstein Ballroom in New York City began to glow an intense shade of red, guitarist Tomo Milicevic and drummer Shannon Leto began a concert that would soon break records around the world.

As the duo began playing the introduction to the song “Escape,” excitement surged through the venue. Nearly every audience member knew the words to the song, and as it reached its peak the crowd sang along screaming its final words, “This is war!” These words summoned lead singer Jared Leto as he sprung out from underneath the stage where he had been singing the song, turning the duo into the universally known trio 30 Seconds to Mars.

The Los Angeles based band was a foursome before 2007 when former bassist Matt Watcher left. Shortly after Watcher’s departure, a lawsuit was filed by EMI records claiming the group had breached their contract signed in 1999. Supported by their dedicated and devoted fan base known as the Echelon, the band began working on their latest album, “This Is War,” and after a settlement was reached the album was released on December 8, 2009.

“This Is War” quickly began climbing up the rock charts while the band was embarking on their world tour. With help from the Echelon, the album went gold on Nov. 22 and after two years of nonstop touring the group scheduled their final dates in New York, setting a Guinness World Record for the most dates on one tour at 309 shows.

To celebrate this achievement and give fans from all over the world a chance to watch one of their final shows, the group set up the world’s first interactive virtual concert. Known as VYRT, this ground breaking advance in technology gave the fans that were unable to buy one of the tickets that sold out in less than 12 minutes a chance to watch the show and chat with other fans and the band itself.

30 Seconds to Mars started their 18-song set with songs including “Escape,” “A Beautiful Lie” and “This is War” all while Leto was commanding the crowd to “jump and touch the sky.” The crowd consisting of only Echelon members never grew tired and moved as one unit the entire night. Leto paid close attention to all of the 3,400-member crowd, even stopping in the middle of a song to shine a spotlight on the one audience member that was sitting down and telling him to get up and join the other 3,399 members of the crowd.

The band continued shredding through more of their world renowned songs including “100 Suns” and “ Vox Populi,” which means voice of the people in Latin and is a song written about dreamers with lines like “Did you ever believe? Where you ever a dreamer.” All members of the Echelon felt connected to this, because on this Dec. 7 night they were living out a dream of seeing the band that inspired them to embrace their inner dreamer.

After singing “ Vox Populi” the group continued to play, with Leto leaving the stage while his brother Shannon, the band’s drummer, took the spotlight with an acoustic guitar in hand. The crowd grew silent knowing what was about to happen as the eerie beginning to “L940,” an instrumental written by the drummer, rang throughout the venue. The song demanded the attention of the now-silenced crowd and continued until a loud round of screams came from the back of the venue. Looking back to see what had caused this, the audience saw lead singer Jared entering the venue, after which he took a spot on a small platform positioned in the back of the audience and began an acoustic set. This four-song included “Was It A Dream?” which surprised the fans because it is rarely played by the group, but when thinking of all the times they had pinched themselves to make sure that what they were experiencing that night wasn’t a dream, the members of the crowd truly realized how much the song belonged in the set.

After Jared Leto finished the acoustic set he made his way back to the main stage where a Guinness Book of World Records official presented the band with a framed certificate. Leto, holding the certificate high above his head, took the mike and began to speak to the Echelon. “I don’t want you guys to take it lightly when I say that each and every one of you have made our dreams come true,” he said. “We truly mean it when we say that without you we would not be here!” The group then sang “Closer To The Edge,” a song whose music video is a tribute to the Echelon. After hearing just a few seconds of the intro, the crowd began to yell and scream in approval and then sang the song loud enough to rival Leto.

The band then left the stage for a few moments as the crowd’s cheers reached an all time high. Soon enough they were back for their encore. The trio grabbed their instruments and began playing older songs such as “The Story,” “Buddha for Mary,” “Capricorn (A Brand New Name)” and “Oblivion.” The venue then grew silent as the crowd anticipated it was time for the band’s final song “Kings and Queens.” The band is famously known for inviting only a few lucky fans on the stage to finish the concert with them as a “family effort.” After Jared Leto invited what seemed to be about 30 fans on stage the song began with great excitement which slowly dwindled into fear as Leto called for paramedics 15 seconds into the song.

The music ceased and the crowd was motionless as Jared Leto jumped off the stage to help a fan that had been crushed against a barricade when trying to get onstage for the encore. As paramedics tried to make their way through the packed stage, drummer Shannon Leto also left his drum kit quickly to help the injured fan. The crowd members that were on the stage, realizing that it could have easily been them, took a knee to show respect. These actions truly showed the Echelon is more than just a fan base; it is a family, and as paramedics took her backstage and gave her oxygen she became responsive.

After the medics had cleared and the band reassured the crowd that everything was OK, Jared Leto said, “If you do one thing tonight I want you to promise me this: Make sure that you follow your dreams because we did and look where it got us. I want you to promise me that tonight is the first night of the rest of your lives! And you will carry this experience in your heart always because I know for a fact we will!”

After those words the group restarted “Kings and Queens.”As the crowd was singing the lyrics “…in defense of our dreams” they all closed their eyes and began thinking of the one dream they would live the first night of the rest of their lives as dreamers, because that dream would always be in their hearts — much like the concert that they had just seen.

(all by Thirty Seconds to

Mars) • Vox Populi • Hurricane • Alibi • The Kill • Capricorn • From Yesterday • Was It A Dream? • Closer To The Edge • Search And Destroy • Kings And Queens