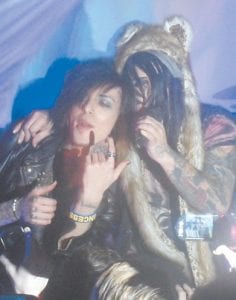 Members of Blood on the Dance Floor perform in concert.

While most bands were wrapping up their tours and heading home for the holidays, the “crunkcore” band Blood On the Dance Floor was embarking on a fivestop tour named “Tis the Season to be Killing.”

Crankcore is a music genre that combines crunk hip-hop, “screamo” and post-hardcore metal. The tour began in New Mexico and ended across the United States on Dec. 20 in the Orlando, Fla., club The Social, where the band had originally formed.

Blood on the Dance Floor, also known as BOTDF, was created by Florida native and front man Dahvie Vanity in 2006. Vanity eventually added the group’s second vocalist Jayy Von Monroe. The group is known for having songs that reflect a variety of music genres, in addition to crunkcore, include electronica, alternative rock, dubstep, pop, and hip-hop. Though the group remains unsigned, they have found success and have even reached fifth on Billboard’s electronic/ dance charts.

Through four albums and 10 tours (including last year’s Van’s Warped Tour), Blood on the Dance Floor has been able to collect a dedicated fan base known as the “Slash Gash Terror Crew.” But don’t be fooled by the name of the group’s fanbase, because the fans of BOTDF are known to be believers of what the group calls PLUR (Peace, Love, Unity and Respect).

Being the hometown stop on the tour the “Slash Gash and Terror Crew” was out in full force for this Dec. 14 show. Sporting face paint that replicated Vanity’s signature makeup, fans packed the tiny venue and waited in anticipation. While waiting they watched the local band Shut Up and Dance open. The wait was finally over and the group they had come to see hit the stage with the enthusiasm that only comes with hometown shows. This enthusiasm was evident early on with the song “Dark Dream.” Even though the group faced technical difficulties with two of three microphones, they worked through it with only one for an impressive and promising beginning set.

As the night carried on, the band continued to rip. After playing songs like “Find Your Way” and “Star Power,” Vanity took the time to dedicate one of the band’s most famous songs, “Bewitched,” to his mother who was present for the show. After that brief moment of gratitude, Vanity and Monroe continued by throwing enough feathers and glitter at the crowd it seemed as if they had bought out a nearby craft store.

When the show reached its fi- nal songs, Vanity took a moment to thank his hometown fans and the founding members of the “Slash Gash and Terror Crew” by saying, “This is the venue where our careers began. We are back here because of you and tonight we are united as one unit!” With this the crowd erupted in applause and the group sang one of their final songs, “Believe.”

As Vanity and Monroe broke into the song’s opening lyrics “Believe in me, when you feel like you’re losing all your hopes and dreams. Believe in me when I am gone, you gotta keep a smile on. Believe in me, goodbye my friends, just celebrate the times we spent. Believe in me, we all die, it’s an awfully big adventure.” The crowd sang along with the band because as those lyrics perfectly depicted that moment in time.

“ Believe” – Blood On The Dance Floor

“Bewitched” – Blood On The Dance Floor

“Death to Your Heart” – Blood On The Dance Floor