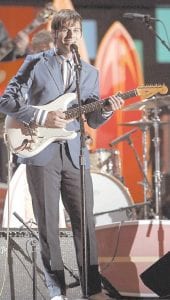 Columbus, Ohio was experiencing chillingly low temperatures, accompanied by strong winds and a few rain showers on June 1. During this time, a huge line was forming as fans waited to see Ohio’s very own Mark Foster with his headlining band Foster the People.

Foster The People, known for the song that was arguably the summer anthem of 2011, ”Pumped Up Kicks,” has won over several thousand fans with their dance infused rhythms and unusual song writing. Though the group has only been together for three years, they have toured all around the world, playing festivals and shows. The group gained added recognition when it had the honor of playing with the reunited Beach Boys onstage at this year’s Grammy Awards show.

As Foster the People has continued to gain notoriety, the band’s 23 — date tour began to sale out — one of those sold — out shows being in Foster’s home state of Ohio.

Accompanying Foster on this show were highly — acclaimed acts Kimbra, the female vocalist that supplied the intense hook to Gotye’s “Somebody That I Used to Know.” The eccentric vocalist provided the show with a colorful spectrum of emotions. While Foster the People’s lyrics are mainly positive and upbeat, Kimbra’s songs ranged from the breezy sounding “Settle Down” to the stirring sounds of “Good Intent.” Whether moody or upbeat, all seven songs she preformed to open the night proved her talent as well as her musical diversity.

The second act to perform were English indie rock band The Kooks. The Kooks, who have been together since 2004, have become well known for the catchy choruses and upbeat hooks the crowd sang along with as the group played songs such as “Junk of the Heart” and “She Moves Her Own Way.”

The cool weather went unnoticed until the group ironically began to play their song “Shine On,” almost as if to test the gloomy clouds that were lingering above Lifestyle Communities Pavilion. This was when the clouds responded by raining on the band as well as the concertgoers. Though the rain began to pour, the crowd was not fazed and began to sing over the sound of the showers.

After The Kooks left the stage, the crowd stood and watched as the Foster the People’s signature setup was slowly unveiled. Stage props included blown — up characters that were suspended on a beam resembling the ones on their album “Torches.” A monumental — sized sun flashed bright colors as projections of the band and colorful patterns were presented in the center. When all of the props were positioned, Foster the People finally appeared before the fans that waited in the weather just to see them.

When the group members made their way to their instruments they began to play as the audience erupted into a rave. During the initial part of what would be a 15 — song set, they played songs such as “I Miss You,” “Life on the Nickel” and “Helena Beat”. After those three songs, Foster took the time to address his fellow Ohio natives.

“There are many familiar faces in the audience today,” he said. “My dad is here, the first girl that I fell in love with is here, and my first best friend is here.” After pausing to look into the crowd he added, “It’s weird seeing them together, but it’s great to see them and it’s great to be back in my home state!”

Foster then continued the set with “Broken Jaw,” “I Would do Anything,” and a few others. He then brought Kimbra and her entire band onto the stage. After both bands found room for their instruments while being encouraged by the enthusiastic crowd Foster said “I recently had the privilege of working with the very talented Kimbra and (DJ) A — trak” and the groups began to play the song that he was speaking of, “Warrior.”

After Kimbra left, Foster took the time to talk about the tour, which he called “international.”

“Kimbra is from New Zealand,” Foster explained. “The Kooks are from England, and me, I’m from Cleveland!” With that the crowd erupted into applause.

Foster the People then played several more songs including, “Call It What You Want,” “Warrant,” and “Houdini.” Leaving the stage, the fans chanted for the group to come back on. Not wanting to disappoint his home state, Foster returned and took a seat at the piano.

Addressing the crowd again, Foster said “I got really excited sitting down backstage when I saw you guys while I was watching the other bands. Some cities have weird crowd, but I knew when I saw you guys that this city has a great crowd! It helps because I’ll let you in on a little secret: every artist gets self — conscious!”

As if trying to repay the crowd, Foster sang a new song entitled “Ruby” as he played the piano. As Foster was finishing the song, his fellow band members walked back on stage to rejoin him for the group’s fi- nal and most popular song, “Pumped Up Kicks.” When the songs well — known intro began to play, the crowd went wild and the band members finished their set with the skill of legends despite their youth.