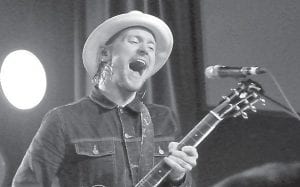 “You probably know we live not that far from here and we go to see shows here,” singer Bear Rinehart said. “It’s an amazing place and there has been a ton of important moments for me in here and so being able to play here is a big deal.”

Rinehart is the front man for the South Carolina band Needtobreathe. He was speaking to an appreciative audience as his group began their Sept. 19 show at The Orange Peel Social Aid and Pleasure Club in Asheville, N.C., exactly one year after their latest album, The Reckoning, was released.

Though the night was just beginning it was evident this show would contain many important moments for not only Bear and the rest of his Americana band, but also for fans of Needtobreathe.

The show was kicked off by Drew Holcomb and the Neighbors. Holcomb, a native of Nashville, began the set playing a couple of songs that included one he wrote for his wife, “I Like To Be With Me When I’m With You.” He then explained that the reason his whole band wasn’t with him on this tour is because his wife (a member of the Neighbors) was seven months pregnant with their first child and couldn’t handle the demands of the entire tour. Then Holcomb said with a smile, “But we thought we would surprise you guys and have her perform with me tonight.” With that, Holcomb’s wife, Ellie, stepped onstage and the crowd erupted in cheers. The Holcombs continued their set with songs like “Fire and Dynamite” and “Live Forever.” By the end of their set it was safe to say the Holcombs had won the crowd over with their contagious smiles and heartwarming songs.

The next act to enter the spotlight was Parachute. This American rock band from Charlottesville, Virginia played songs from on their debut album, Losing Sleep, as well as their most recent album The Way it Was. These songs included “Ghost,” “Kiss Me Slowly,” and “Something To Believe In.” Though the five-piece band was not headlining, they received applause that could easily be mistaken for those received by the main act. This applause was especially loud when the group covered rock legend Tom Petty’s classic “Won’t Back Down.”

The final act of the night was headliner Needtobreathe; a band whose sound can be categorized somewhere between The Kings Of Leon and Mumford and Sons. Early in their 14- song set, the performances included “Devil’s Been Talkin’,” “Let Us Love” and “The Outsiders.” After these songs the group then eased into the soulful harmonies of their song “Washed by the Water.” During this song the crowd’s vocals echoed throughout the venue’s walls as they sang along with the band. Noticing the audience’s booming choral enhancement, Bear smiled and said, “So I hope this is going to be one of those nights where I can’t get you guys to shut up!” With those words of encouragement, everyone in the building reverberated the chorus one last time.

After several more songs, Bear Rinehart’s brother Bo Rinehart, who is the group’s songwriter as well as guitar and banjo player, stood on one of the Orange Peel’s speakers and began to play the well known beginning riffs to Johnny Cash’s “Folsom Prison Blues.” After the crowd erupted with applause, Bo made his way back to the microphone and sang the song’s opening lyrics and then stepped away from the microphone as the group played a respectful jam session before Bear introduced the band members.

After the introductions were completed, Bear decided to get down to business and addressed the crowd by asking, “Are ya’ll feeling alright tonight?” He then paused but quickly continued, “Did ya’ll come to see a rock and roll show or what?” As the crowd responded with screams and cheers, Bear answered by saying, “Well, I’m going to bring one to you.”

The group played four more songs before addressing the crowd again — “More Time,” “White Fences,” “Keep Your Eyes Open,” and “Wanted Man.” Bear spoke once more and brought up their recent late night television performances: “If you all are from here, then you should probably know that it was the weirdest thing that we have ever done and we felt totally uncomfortable and to be honest very not important. So if you ever wanted to be on one of those shows, Jay Leno or Letterman or something, trust me, it’s weird!”

After pausing to catch his breath, Bear carried on: “Just being from the South, you know, just being small town kids, that whole thing is weird. I guess I’m telling ya’ll this just to tell you basically, we could care less about all that stuff and really a lot of other stuff, but nights like tonight where you come and enjoy yourself it makes all the stuff we worry about completely meaningless.” The band then played their 2011 single “Drive All Night” before leaving the stage.

Reappearing onstage without the rest of the band, Bear walked into the spotlight with an acoustic guitar. Positioning himself in front of the microphone he began to sing “Difference Maker” as he strummed the guitar. Halfway through the song the band, including Bo carrying another acoustic guitar, made their way to the stage. Rather than standing in their previous spots where they had stayed the entire concert prior to this song, they all crowded around Bear’s microphone and provided backing vocals to the song’s chorus. After singing the chorus several times with the band, Bear repositioned the microphone away from the band members and himself as they belted out the chorus one final time, sending chills through the audience.

When the group finished “Difference Maker,” they returned to their previous positions and finished their set with two final songs, “Something Beautiful” and “The Reckoning.” During these songs The Orange Peel was brimming with sound from the crowd’s singing. After “The Reckoning” the group left as the song’s final lyrics were echoing through the venue’s halls, proving Bear’s previous prediction right because there was no way that he would have ever gotten the fans’ supporting vocals to be silenced.