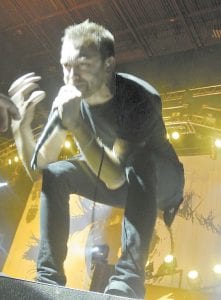 Tom Morello led the rock band Rise Against during their season-opening performance at Riverbend Music Center.

Riverbend Music Center’s 2012 concert season kicked off recently with a sold-out show at PNC Pavilion headlined by punk rock legends Rise Against. Though the show was not booked for the main stage of the Cincinnati venue, it proved to be superior to many shows that have occurred on Riverbend’s main stage.

The show, which also featured Florida rockers A Day to Remember, was opened by supporting band Title Fight. Though Title Fight exhibited high energy throughout their set, they were plagued with sound problems and lacked suffi- cient vocals. Unfortunately the group did not receive an abundant amount of support by fans that had little patience. The group left the stage as soon as their allotted 30 minutes were up.

After Title Fight left the stage, members of A Day to Remember took their places on the stage and the crowd immediately forgot about the less than satisfactory band they had just seen. A Day to Remember immediately ripped into their hardcore riffs with the metal sound that has made them famous. While playing songs such as “It’s Complicated,” “Homesick,” and “2nd Sucks,” it was easy to see why the group had a large fan turnout.

While A Day to Remember only had a short onehour set, they packed it full with a fun yet random stage show. This stage show included TP bombs (throwing toilet paper rolls into the crowd as if they were streamers), a t-shirt cannon toting man dressed as “Gumby,” and a color-assorted balloon drop finally. As the balloons descended, band members took their final bows and left the stage.

When the balloons had all popped and the crowd had gone silent, it was finally time for Rise Against to start their set. The crowd roared with cheers and applause as each member walked onto the stage. When they finally took their places, the band tore into a 20-song set. Even at the beginning of the set, while playing songs like, “Ready to Fall,” “Survivor Guilt” and “The Good Left Undone,” Rise Against’s dedicated fan base sang perfectly in sync with lead singer Tom Morello.

After playing several songs, Morello finally addressed the crowd, thanking them for selling out the venue. Morello then explained the band’s long history with Cincinnati and reminisced about all the times the band had played there, saying, “I see a lot of familiar faces here tonight. It’s nice to be back in this city where we have played so many times before, and it’s even better to see its residents that have supported us from the very beginning!”

Morello paused to take in the moment and then continued, “Now we are going to play a song that we probably played every time that we have come here.” With that, the band broke into one of its oldest songs, “Broken English.”

The group played several more songs, including “Drones” and one of their latest singles, “Help is on the Way.” After these songs they began to play the powerful introduction to their song “Re-Education (Through Labor).” The crowd erupted in cheers and applause, knowing that this was a song that defined the band. Toward the end of the song Morello paused and began to talk while continuing to play his guitar. Building tension Morello said, “Whatever is weighing heavy on your heart tonight, let’s just let it all go! Whether you sing it out, dance it out, or scream it out, I could not think of a better way to spend a Saturday night!” With that Morello, accompanied by the entire audience, shouted the song’s final lyrics.

The show continued with several more fast paced rock songs but then the band, excluding Morello, left the stage. At this time Morello took out his acoustic guitar and slowed things down for a moment, singing an emotional rendition of two of the group’s well-known ballads, “Audience of One” and “Swing Life Away.” After these songs were played, many of the more dedicated fans were on the brink of tears as the rest of the group rejoined Morello on to play their politically-opinionated anthem “Make It Stop”. When “Make it Stop was completed, the band played one more song and then left only to be quickly cheered back on for an encore.

In this three-song encore the audience made sure to live up to the promise they had made to Morello. While singing, dancing or shouting, it was clear the crowd members had huge weights lifted off their shoulders. When the final chord of the last song of the night, ”Savior,” was played there was not one person under that pavilion that would disagree with Morello’s saying there was not a better way to spend a Saturday night.

•It’s Complicated — A Day to Remember

•Have Faith in Me — A Day to Remember

•The Good Left Undone — Rise Against

•Make It Stop — Rise Against

•Re-Education (Through Labor) — Rise Against

•Audience of One — Rise Against

•Swing Life Away — Rise Against

•Prayer of the Refugee — Rise Against