Concert was full of surprises 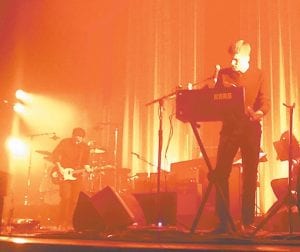 Members of Death Cab for Cutie were bathed in orange stagelights when they performed recently at Louisville’s Palace Theatre.

Aside from fans packing into the Palace Theatre and taking their seats for Death Cab for Cutie’s recent Louisville appearance, everything else on this night would be far from average.

When the show finally started, fans were immediately surprised at the sheer number of members in the Magik*Magik Orchestra as they made their way to the spotlight and took up nearly a third of the venue’s large stage. After taking their seats, the orchestra led by conductor Minna Choi gracefully lifted their instruments and began to play an interlude of the songs the band would play later that night.

As the orchestra played, the audience was again surprised when Death Cab cheerfully walked onstage dressed in black button down shirts, black slacks, and black dress shoes, looking a lot like the orchestra, whose members were dressed in all black and white formal wear. This was only the first act of the night, but it proved just how united the two musical groups were. It was clear Death Cab, formed in Bellingham, Washington in 1997, traded in their usual skinny jean/Converse/ t-shirt combination and opted for an unexpected look that would not overshadow the orchestra, which is based in San Francisco. After they finished greeting the audience with friendly waves and smiles, the group picked up their instruments and began the show.

Starting off with several songs that appeared to be unfamiliar to most of the seated crowd such as “Passenger Seat,” “Different Names For The Same Thing” and “Title and Registration,” it was clear that Death Cab opted to play songs that would complement the orchestra’s talent rather than playing through a greatest hits list and shoving the orchestra in the background. Though this was an unexpected choice, it proved to be a wise one as the audience members danced and swayed in their seats to the perfect selection of songs that highlighted every instrument. The orchestra’s talent was brought front and center when Death Cab began to play “Codes and Keys.” This was the very song that had brought the two groups together when Death Cab was recording their recent album of the same name.

After finishing “Codes and Keys,” Death Cab and the orchestra were commended with a thunderous applause. When the applause finally began to die down, Death Cab’s lead singer Ben Gibbard addressed the crowd, “When we walked on stage, I heard several people welcome us to this great city.” He then took a small pause and modestly continued. “It must be southern hospitality, and it’s great to feel welcomed!”

The band then began to applaud the audience for the kind words and shoutouts that were prevalent throughout every quiet moment of the show. The audience then showed equal respect by applauding both bands for being there. Death Cab, quickly followed by the orchestra, continued with several songs including more popular tunes such as “You Are a Tourist,” “Cath” and “Soul Meets Body.” During these songs the two groups again proved just how close they are as Gibbard and Choi alternated spots behind a piano they both played masterfully.

When Gibbard began to strum his acoustic guitar and the orchestra began to accompany him to the familiar beginnings to “Stay Young Go Dancing,” the previously seated crowd was brought to its feet where it would stay for the rest of the show. After finishing the song the crowd roared with applause and both groups left the stage. After several minutes, Death Cab reentered the spotlight to start their encore with an acoustic set that included the live debut of the song “Monday Morning” from their latest album. As the band was playing the final rhythms to the song, the orchestra walked back onstage where they too were greeted with loud applause.

The groups then played the final three songs of their 23-song set, finishing with “Transatlanticism.” This seven-minute finale started off with just the band, but when the song reached its chorus the orchestra joined in for the last time mixing Gibbard’s somber lyrics with the melancholy bowing of the string section, creating a beautiful combination. This combination continued to echo through the audience as the orchestra members put their instruments down and hugged each other as well as members of Death Cab. In a final act of unity, both groups packed in together across the stage to grasp hands and take a bow.

“What Sarah Said,” “Different Names For The Same Thing,”“ Monday Morning,” “Little Fury Bugs,” “Stay Young Go Dancing,” “Grapevine Fires,” “Codes and Keys,” “Cath,” “You Are A Tourist,” “I Will Follow You Into The Dark,” and “Transatlanticism.”

Cassidy and Kennedy Breeding are nearing the end of their freshman year at Letcher County Central High School.