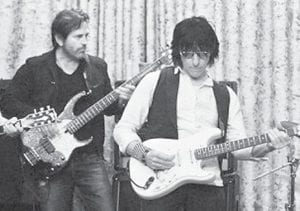 KIP WINGER (left) performed with famed rock guitarist Jeff Beck earlier this year. Winger will be in Whitesburg this week performing a concert at Summit City. Nearly all tickets have been sold.

Never underestimate the power of music, even when it comes to bringing some much-needed new dollars into a small town’s economy.

When veteran rock musician (and classical music composer) Kip Winger performs at Summit City in Whitesburg this Thursday night (Aug. 22), the audience for the nearly sold out performance will include Winger fans from five other states besides Kentucky. While in Letcher County, those out-of-area fans will be staying in local motels, eating at local restaurants, and buying gas from local retailers.

A week later, fans from even more distant locations — nine states in all — will be traveling to Whitesburg to see the young and acclaimed California bluesrock band Rival Sons, whose fans include Led Zeppelin guitarist Jimmy Page.

The Rival Sons’ Aug. 29 headlining performance at Summit City is sandwiched between shows in Detroit (Aug. 26) and St. Louis (Aug. 31), where they are the opening act for former Van Halen and Montrose singer Sammy Hagar. The band’s Whitesburg performance, will be opened by Nashville blues-rock duo The Cold Stares, whose members, guitarist/ vocalist Chris Tapp and drummer Brian Mullins, grew up in Hendersonville, Ky.

The Letcher County appearances by Rival Sons, Kip Winger and other national performers is made possible by the efforts of local promoter Greg Napier through an arrangement with Summit City and its owners, Joel Beverly and Amelia Kirby. Napier, a former basketball star at Hazard High School, is responsible for booking and paying the national acts. Summit City provides the venue and keeps the earnings from food and drink sales.

Whitesburg Mayor James Wiley Craft says that consistently being able to offer top-quality music that attracts fans from other states and elsewhere in Kentucky is a good start toward making Whitesburg the “destination” city for southeastern Kentucky that many believe it can be.

“Greg Napier lives in Perry County, but he believes in Whitesburg and is showing us what can be done here,” said Craft. “As we continue to attract visitors for whatever reason it may be, we all need to do all we can to make them feel welcome.”

Meanwhile, Napier on Monday announced the coming of another rock band with a large following to Whitesburg. The German hard rock band Kadavar, which is strongly influenced by early 70’s bands such as Black Sabbath, Deep Purple, Buffalo and Budgie, will appear at Summit City on Sept. 12. Kadavar’s second album, Abra Kadavar, was released in May.

Kip Winger’s commercial success began in 1984 when a song he co-wrote appeared on a hit album by Kix, Midnite Dynamite. In 1986, Winger began a two-album stint as bass player for Alice Cooper (Constrictor, Raise Your Fist and Yell). Winger also played bass on Bob Dylan’s 1987 album Down in the Groove before stopping his work for others to concentrate full-time on his own band he was forming, which eventually became known as Winger.

The band Winger’s self-titled debut album was released in August 1988 and quickly became a platinum seller, as did the band’s second album, In the Heart of the Young, released in 1990.

By the time Winger’s third album, Pull, was released in 1993, the plug had literally been pulled on the type of “pop metal” music that had catapulted Winger and other bands such as Poison, Motley Crue, and Cinderella to the top of the charts. Taking their places were the new “grunge” bands led by Nirvana and Pearl Jam.

“A lot of us couldn’t get gigs,” Kip Winger, 52, said Sunday night during an interview with WMMTFM in Whitesburg. “It was kind of the way when disco wasn’t cool anymore.”

Winger told WMMT that instead of playing sold-out stadiums with his band he was suddenly faced with playing solo shows at bookstores before audiences as small as 10 people. He said he used that time to learn how to make his solo shows fun for the audience as well as for himself.

Winger said the audience at his Whitesburg show would be treated to 90 minutes of material he wrote for the band Winger and for himself as a solo artist.

“I’ve been doing it since 1997, and it’s turned into this thing I’ve grown to love,” Winger said. “It’s a fun night for everybody.”

While continuing to work on his solo career, Winger, a native of Denver, began studying classical music under Richard Herman at the University of New Mexico. Winger told WMMT he keeps his classical music career separate from his work in popular music.

Already this year, Kip Winger has performed with the Colorado Symphony Orchestra. Earlier this month, he returned to the U.S. from Italy and Germany, where he had been on tour as a member of The Alan Parson Live Project.

On August 30 and 31, Kip Winger and four others will mark the 25th anniversary of Winger with full reunion concerts in Algodones, New Mexico and in Las Vegas, Nevada. The shows, which include guests Warrant and Head East, will be recorded for an album.

In October, Winger will perform a ballet suite “Conversations with Nijinsky” with the Tucson Symphony Orchestra and at the Lincoln Center in New York City with the San Francisco Ballet.