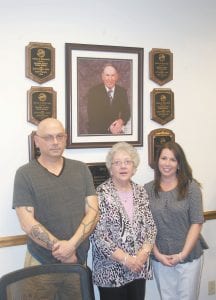 Letcher County Farm Bureau has named its conference room at Dry Fork in honor of the late Jerry Coots. Coots, who died December 1, was a retired state Fish and Wildlife Conservation Officer, and was a member of the local Farm Bureau Federation Board for 36 years. Coots began his career as a teacher and football coach at Whitesburg High School. Pictured (left to right) are his son, Gregory Coots, widow Sweila Coots, and daughter Scarlett Coots with a portrait of Jerry Coots that now hangs on the wall of the conference room. (Photo by Sam Adams)