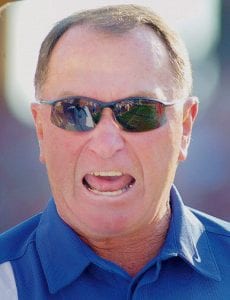 The storm clouds gathered quickly. In the span of two plays – a safety and a kick return for a touchdown – Kentucky went from being up a point at Arkansas to down by eight with less than 12 minutes to play on Saturday.

It’s a sequence the Wildcats have seen played over and over for much of their history, watching helplessly as another step toward respectability vanished in the final minutes.

But these Wildcats say they’re different. In the fourth quarter against the Razorbacks, they tried to prove it. Standing in the huddle after falling behind, wide receiver Steve Johnson looked at quarterback Andre Woodson and knew the game was far from over.

“The look in his eyes was like the game was just about to start,” Johnson said. “When he comes out with that swagger, that confidence, it just relaxes the rest of us.”

Twelve minutes and three Woodson-produced touchdowns later, the Wildcats walked off the field with a 42-29 victory, another chapter in what is quickly becoming a special season for the 14th-ranked Wildcats.

Kentucky (4-0, 1-0 Southeastern Conference) has won nine of its last 10 games dating back to last year. In five of those victories, the Wildcats trailed in the final quarter only to pull off one very unKentucky-like rally after another.

Brooks attributes his team’s newfound fortitude in having better depth, better players and a better attitude than it did when he came on board in 2003.

The players say there’s more to it. After years of struggling to escape the bottom of the SEC’s Eastern Division and watching as arch rival Louisville has risen to power, they say they’ve simply had enough.

“I know this team and where it came from,” Steve Johnson said. “They know how it was in the past and they don’t want to go back to that situation.”

But as surprising and gratifying as the last season-and-a-half has been, the memories of the early days of Brooks’ tenure are still fresh.

Even now, with the team enjoying its highest ranking since 1977, the Wildcats don’t exactly feel they’ve “arrived.”

“I think (pollsters) feel obligated that they have to put us up there in the rankings because we keep winning,” said defensive lineman Jeremy Jarmon. “Just because they have us high in the rankings doesn’t mean we’re getting any respect. I feel like we don’t have any. We have to keep going out there every week to get it.”

They won’t lack for chances. After hosting Florida Atlantic (3- 1) on Saturday, the Wildcats begin a torturous October that includes games at No. 16 South Carolina and home against No. 2 LSU and No. 4 Florida.

“You look at our schedule, that’s what’s tough,” said wide receiver Keenan Burton. “You look at a situation where you beat Arkansas, and you say ‘well, it’s a great thing you beat Louisville.’ It’s a great thing, but you turn your head and look at the schedule and you’re like ‘We’ve got no time.'”

Don’t worry about the Wildcats overlooking the Owls, who have already beaten Minnesota this season.

Despite one of the best starts in school history, there’s plenty of room for improvement. Brooks said he’s never had a team that’s given up kick returns for touchdowns in consecutive weeks as the Wildcats did against Louisville and Arkansas.

As impressive as they’ve been, they also know they’ve been a bit lucky. Brooks said he shouldn’t have to worry about the Wildcats falling into a trap against the Owls, but it doesn’t mean he won’t.

“That’s why I don’t sleep well,” Brooks said. “I think they get it, but I’m never sure they get it.”

What the Wildcats seem to get now is an understanding of how high they can climb. Playing one of the most daunting schedules in the country is a challenge, but they’ve been doing it for years. Now, though, they think they finally have the talent – and just as important, the confidence – to handle it.