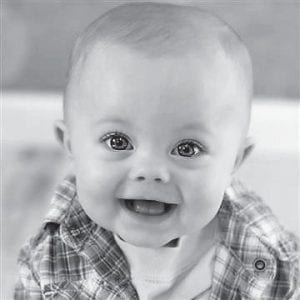 He is the son of Kyle and Brandy Smith of Whitesburg. Conner received 9,882 votes, which was the largest number of votes for a single entry. Contest prizes will be awarded to the Smith family at the Mountain Heritage Festival on Sept. 24, in Letcher County.

During the contest, the Smiths posted the following description along with Conner’s photo: “Conner is always smiling . . . unless he’s hungry. He loves to bang on his drums and ride the four-wheeler. After he’s tired from a long day of playing, he likes to cuddle before going to sleep.”

Appalachian Regional Hospital and WYMT-TV launched the 2013 Cutest Baby contest on Facebook on May 13. There were 580 baby photos submitted and uploaded to ARH and WYMT-TV Facebook pages and 52,147 votes were cast. The contest ran from May 13 to August 13.