TO PERFORM HERE SATURDAY — Connor Christian and his band, Southern Gothic, will be in concert Saturday at Summit City in Whitesburg. Admission to the show, which begins at 9 p.m., is $8. The band’s song, “Sunday Suit,” can be seen on CMT. Visit www.connorchristian.com for more information.

EDITOR’S NOTE: Connor Christian, a young Southern rock musician whose singing style has been compared favorably with Ryan Adams and early Elton John, will perform in concert in Whitesburg on Saturday night at 9 p.m. This feature appeared in the Athens (Ga.) Banner-Herald.

Atlanta-based musician Connor Christian played his first gig as a 12-year-old and left home for good two years later, so it’s no stretch to say he’s got plenty of interesting stories to share, many of them embedded one way or another in what has been described as his “soulful songs of experience.”

The 28-year-old Christian can talk about being arrested and deported from France for illegal busking (“I didn’t know you had to have a permit,” he says), growing up in Indonesia (“Indonesian was my first language,” he says) and even running away to Philadelphia with his girlfriend years before he was old enough to apply for a driver’s license. 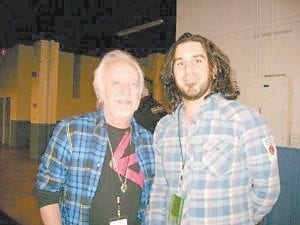 “Your experiences shape you as a person,” says Christian (who with his band Southern Gothic will perform in concert at Summit City in Whitesburg on Saturday). “And your personality shapes you as a musician. My experiences have contributed directly or indirectly to who I am as a musician.”

With three albums – including his latest “90-Proof Lullabies” – under his belt, Christian has crafted a canon of tunes that combine Southern rock, Americana, country and folk and work just as well as solo numbers as they do with the combined forces of his crack band.

“I play all the same songs,” says Christian, who adds he generally performs some 250 shows a year, perhaps a carryover from the days of his youth, when his family frequently moved from the United States to Indonesia to South Korea to Belgium.

Christian recounts the time he was asked to perform solo at a small wedding and was assured that all the instruments and equipment would be provided – all he had to do was show up and play.

“The bride and groom liked my song ‘Waiting for Princess’ and had seen us play, and I play piano on that song,” he says. “So when I get there, there’s no guitar, only a piano and a microphone. So I spent an hour trying to figure out how to do piano versions of my songs. Situations like that teach you what your songs can do and what you’re capable of musically.”

Saying he always wanted to be a musician, Christan’s first showbiz job came as a seventh-grader when his thrash-metal band, The Abyss, played at Atlanta’s longshuttered Wreck Room.

“By the end of the sixth grade, I knew four chords, which was all you needed to start a punk band,” says Christian, who often opens for friends like Shawn Mullins and Drivin n Cryin’s Kevn Kinney. “The night we played the Wreck Room was exciting, but I was heartbroken because Alice in Chains played that same night and we couldn’t go see them.”

Christian and his Southern Gothic colleagues have begun the process of recording the follow-up to “90-Proof Lullabies” and will continue their road warrior ways.