Conrad expected to have big year 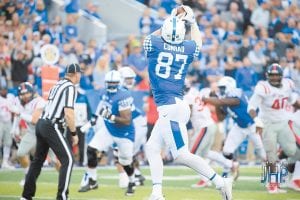 He had only 16 catches for 286 yards and four scores in 2017 before missing the final three games with a foot injury. Yet not only is tight end C.J. Conrad being counted on as a pivotal player in the Kentucky offense, he’s already projected to be one of the first tight ends picked in the 2019 NFL draft.

In his career, he has 50 receptions for 697 yards — 14 yards per catch — and nine touchdowns. But as much as some Kentucky fans have wanted to see the ball go his way more, Conrad has filled his role as a dominating blocker the last two years for Benny Snell and others.

ESPN has Conrad projected as the first tight end in the 2019 draft ahead of Tyler Petite (USC), Tommy Sweeney (Boston College), Foster Moreau (LSU) and Matt Sokol (Michigan State). Other projections have him as the second or third tight end picked anywhere from round two to round four. But a tight end has been taken in the first round three times in the last five NFL drafts. 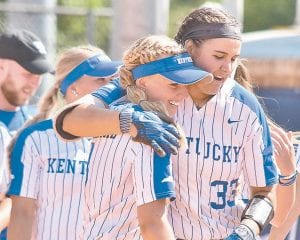 The 6-5, 245-pound Conrad could become the first UK tight end drafted since Jacob Tamme in 2008. Like Tamme, he has soft hands and deceptive speed (4.7 seconds in the 40-yard dash).

Conrad was limited to noncontact drills in spring practice to make sure he’s fully ready to go when the 2018 season opens. While many players would have been happy to leave spring practices early, Conrad was not. He missed the contact and work.

“That kid is a competitor. He will be back 110 percent in June. We just couldn’t take any chances with him,” UK tight ends coach Vince Marrow said.

Marrow is not surprised that Conrad has already been named to several preseason all-SEC teams as well as listed high in mock drafts.

“He is one of the top five tight ends in the country and the NFL thinks the same thing just off the way they are ranking him right now. He could catch 40 or 50 balls. He’s catching 20 balls but what people are missing is how good he can block,” Marrow said. 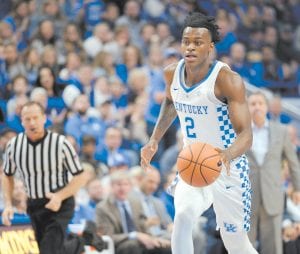 Jarred Vanderbilt might be “unique” enough to find a spot on an NBA roster. (Vicky Graff Photo)

Marrow said Conrad could easily catch 50 passes this year if that’s how Kentucky wanted to set up the offense. Instead, Conrad’s best value is his versatility.

“He does so much. He is valuable in pass protection, the run game. If C.J. went to a school where they just threw the ball a lot, he would catch 60 balls (a year),” Marrow said. “He’s that good. What he does for us is very important. When we lost him after the Georgia game, it showed in our offense. He can do so many things and we scheme things in our offense for him.”

Blue Ribbon College Basketball Yearbook editor/publisher Chris Dortch doesn’t think having Wenyen Gabriel and Jarred Vanderbilt both keep their names in the NBA Draft even without almost no chance of being a first-round pick signals any major change at Kentucky.

Vanderbilt would be the first one-and-done player at UK not to go in the first round during John Calipari’s time at Kentucky.

“I just think it depends on the year and the recruiting class. This particular class wasn’t as strong as others,” Dortch said. “And it depends on individual situations.

“Some players feel a need to try and go out and earn a living. Others, without that pressure, are able to stay in college, progress at their own pace, and jump for the pros when they’re ready. It just so happens that at Kentucky, and Duke, one and done players are the norm.”

Dortch believes Vanderbilt has a “chance” to earn a NBA roster spot and that eventually Gabriel might as well. Kentucky coach John Calipari indicated last week he felt the same way.

“Vanderbilt is a unique player from the standpoint that you can run offense through him at his size. He’s also a terrific rebounder,” Dortch said. “Gabriel needs to get bigger and stronger. But because he can space the floor, he’s got a chance to make a roster one day.”

Senior Erin Rethlake spent a lot of time the second semester in a special education class at Bryan Station High School in Lexington as part of her preparation to earn a teaching degree.

Her success on the softball field did not go unnoticed by those at the school — and that impressed Rethlake.

“It was fun because I was in a high school for the first time. It was fun walking the hallways each day because you could see them wearing their garb: Bryan Station High School Softball,” Rethlake said.

“I had a UK Softball book bag that we get, and every time you’d walk through the first couple of days they were like, ‘Look!’ And it was funny because I was like, ‘Hi,’ like trying to introduce myself or anything, but it was fun to interact with those girls. Their love for the game is so much fun.”

Rethlake remembered one game where several Bryan Station students came to a UK softball game and how much it meant to her.

“It gives you a whole different appreciation for wearing this jersey and getting to do the things that we do,” Rethlake said.

Greg Byrne was associate athletics director at Kentucky under Mitch Barnhart from 2002-2005 before becoming AD at Mississippi State, then Arizona and now Alabama.

He admits working for Barnhart taught him a lot of lessons.

“Mitch is the best I have ever seen at caring about every young man and every young woman in the athletics department,” Byrne said. “No matter the sport, just the passion he has for them to have success as a team and individual. He is so good at it that you can’t help but notice and want to do the same.”

Byrne has made sure to use what he learned from Barnhart with the coaches who now work for him.

“I tell all our head coaches if I can help, don’t do it to appease me. But if I can help in the recruiting process and meet with any young man or young woman and meet with the family, let me do it,” Byrne said. “I learned that from watching Mitch.”

Byrne said he sees Barnhart at SEC meetings and still talks regularly with him on the phone.

“I owe a lot to Mitch and hold him in high esteem. He’s simply the best,” Byrne said.

What did Terry “Touchdown” Wilson like best about Kentucky quarterbacks coach Darin Hinshaw when Kentucky started recruiting him?

“He is a great guy. We were in there watching film on my visit and going over plays and everything,” Wilson said. “We just clicked. I was so used to the same concepts, same protections I have ran before.

“We were really on the same page and he liked that a lot. He is a great guy. When we were watching film and I got some protection calls — even with the new names — right, he just started yelling and I thought, ‘I can deal with this.’”

Obviously Wilson signed with Kentucky and going into preseason camp is listed co-No. 1 at quarterback with redshirt sophomore Gunnar Hoak.

With so much attention focused on what P.J. Washington, Jarred Vanderbilt and Wenyen Gabriel would do about the NBA Draft, it was easy to overlook one news item that came out of the SEC spring meetings last week.

The SEC is going to pursue negotiations to extend its agreement with the city of Nashville hosting basketball championships. The tournament is scheduled to be played there already in 2019- 2020-2021.

“We have had a great experience in Nashville at Bridgestone Arena,” SEC commissioner Greg Sankey said. “We look forward to our future there. We have great relationships with the Nashville Sports Council, the Nashville Predators and the Nashville Convention and Visitor’s Corporation.”

Quote of the Week: “I’m happy for him that he has an opportunity because it is a great job, not a good job. It’s got to be one of the top-3 jobs in our league. Where it is, the facilities that it has, the school is unbelievable. There’s a range of student-athletes you can get. They have every major, the campus is one of those places where the kids are proud to be there,” Kentucky coach John Calipari on Tom Crean and his new job as Georgia’s basketball coach.

Quote of the Week 2: “I’m sad, I’m disappointed and really, more importantly, I’m hurting. These are some awesome guys that I don’t get to coach anymore and ultimately, it’s my fault, and that hurts. Man, I feel bad for those guys,” UK baseball coach Nick Mingione after UK was left out of the NCAA Tournament despite having 16 wins over top 50 teams.