Consent to search results in arrest 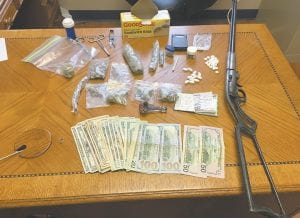 Cash and contraband were seized in Monday’s search of home near Jenkins.

A Jenkins man was charged with drug trafficking and firearms possession after a search of his home at McPeaks Branch near Jenkins.

Clarence Edward Yeary, 38, of 394 McPeaks Branch, was lodged in the Letcher County Jail after his arrest on Monday. According to the Letcher County Sheriff ’s Department, Sgt. Alicia Congleton and Jenkins Officers Josh Richardson and Mike Garner when to Yeary’s home for a “knock and talk,” after a complaint about possible drug trafficking. Congleton said Yeary, who was on probation for a previous conviction, agreed to let police search the house. According to a citation issued to Yeary, police found $608 and a cell phone in Yeary’s pocket, marijuana packaged individually “consistent with trafficking”, a scale, and pills suspected to be Neurontin that were not in their proper container. On further searching police said they found drug paraphernalia and a .410 shotgun, which officers said Yeary told them would not fire.

According to the citation,

Yeary refused to walk to Congelton’s car, and she “drive stunned” him with her Taser, meaning he was shocked with the electrodes on the end of the device, but not shot with the darts.

Yeary was charged with trafficking in less than eight ounces of marijuana, and resisting arrest, both Class A misdemeanors; prescription drugs not in the proper container, a Class B misdemeanor; and possession of a firearm by a convicted felon and second degree trafficking in a controlled substance, both Class D felonies.