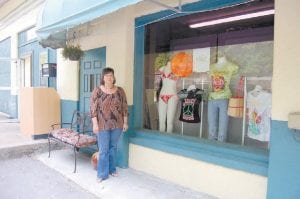 Debbie Campbell, owner of Annie’s Frugal Finery, posed for a photo in front of her new location at 31 Hazard Road overlooking the community college.

Debbie Campbell isn’t giving up on her longtime dream of owning a consignment store in Whitesburg.

In October, Campbell opened a store near KY 15 in West Whitesburg where people could sell gentlyused clothing or items with price tags still on them. She named her business “Annie’s Frugal Finery” in honor of her 16-year-old daughter.

Just as Campbell was beginning to see her dream come true, an electrical fire destroyed the building and everything inside on Jan. 13. Campbell said she lost more than 7,000 pieces of merchandise in the fire.

Four months later Campbell has found a new location for her business at 31 Hazard Road.

“I think it was really missed in our community,” said Campbell. “I had about 100 people call or email me. They just wanted to see it reopen.”

Because Campbell has clothes displayed in the front store window and a sign attached to the building, some people think the shop is open for business. Although the grand reopening of the store isn’t until May 28, Campbell has been accepting clothes from consigners and has allowed people to browse through merchandise and purchase items.

People who bring in clothes to sell are called consigners and earn 50 percent if an item is sold. Campbell said people come from Lexington, Pikeville, Virginia and surrounding counties to cosign as well as shop.

Campbell is accepting spring and summer clothes. Items won’t be taken if they contain stains or tears, are faded or are missing buttons.

Anita Eldridge and her 15-year-old daughter, Kelah, of Sandlick, stopped by the shop on Monday evening to drop off some of Kelah’s clothes.

“She tried on a bunch of her summer clothes and they didn’t fit,” said Anita Eldridge. “I decided to bring some clothes into the store and see if we could make a little money.”

Campbell said several customers have walked into the store since she, her husband, Frank, and Annie have been getting the store ready for the grand re-opening.

“On Saturday I came in and two carloads were waiting to shop,” said Campbell.

When Campbell opened her store last fall, she had nine consigners who were mostly friends and family. Before the fire, the number of consigners had grown to almost 180 in three months.

“Before we were so full that we had to quit taking consignments for about three weeks so we could get caught up on processing the items,” said Campbell.

So far, at least 30 consigners have brought clothes to the store’s new location.

“We are pretty selective on what we take,” said Campbell. “We really only take brand names.”

Campbell said purses were the biggest seller at her old location.

“We sell tons of jewelry, purses and shoes,” said Campbell. “Jeans and shorts are in second running.”

In late October Campbell will begin accepting semiformal and formal dresses, of which she sold many last year.

Campbell compares consignment shopping to going on a treasure hunt.

“You may find the very piece that will define you,” said Campbell. “It makes it more individual and unique.”

“It is an avenue for people to buy thing affordably without having to drive two hours to get brand names,” said Campbell. “I think it is a good location and we have enough of a following that I think people will come here.”