Constable was trying to stop man before wreck on Route 7 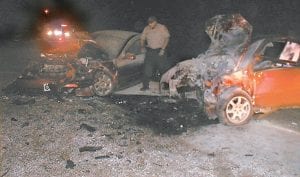 Jack Gibson, who lives near the scene of the wreck, took this photo after helping rescue the occupants of the vehicles after the collision at about 11 p.m. last Saturday.

Police say a Sandlick man was flown by helicopter to a medical facility after he lost control of the car he was driving and crashed into a car Saturday in Jeremiah. A dog was killed in the head-on collision.

Thomas R. Absher, 29, was injured March 21 when he lost control of the Dodge Neon while driving around a steep curve on KY 7 near the mouth of Blair Branch. The car veered into the other lane and hit a Lincoln LS head on traveling in the opposite direction, said Letcher County Sheriff ’s Deputy Sidney Fields.

Alice Caudill, 33, of Blackey, was driving the Lincoln LS. Her 17-yearold daughter and her four-year-old daughter were passengers in the Lincoln LS. Caudill and her two daughters were transported to the Whitesburg hospital, treated for injuries and released.

Killed in the wreck was a small dog that was in the car driven by Absher.

Constable John Amburgey had received a domestic violence complaint from Absher’s girlfriend, Fields said. When he arrived at the woman’s residence Absher wasn’t there and the woman told Amburgey that Absher had left in her Dodge Neon, Fields said. Amburgey located the car on Highway 7 South and activated lights and siren, but Absher failed to stop, Fields said.

Fields, who has charge of the investigation, said evidence in the case will be presented to a Letcher County grand jury.