By WILLIAM FARLEY and SALLY BARTO 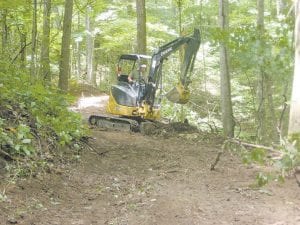 BLAZING A TRAIL – Doug Stewart used an excavator Monday to clear the way for the Pioneer Horse Trail atop Pine Mountain near Whitesburg.

“To get the trail done is a big thing for the county,” said Jimmy McIntosh, a commercial painter and horse enthusiast from Craft’s Colly who worked to get the trail approved. “We now have somewhere we can ride our horses and invite others to ride their horses with us.”

The controversial paving project, which was completed in June 2006, Shepherd Trail near Whitesburg with Kingdom Come State Park near Cumberland. When the 14- mile dirt and gravel road was paved, McIntosh and others who rode horses on the Trail were left trying to find a new place to ride.

“We were using that every weekend for our horse and buggies,” said McIntosh.

McIntosh formed a Horse Trail Committee more than two years ago and pushed for the Pioneer Horse Trail to be created on Pine Mountain.

The Letcher Fiscal Court voted at its June meeting to enter into an agreement with the Kentucky Department of Fish and Wildlife, which allowed the county to move forward with the Pioneer Horse Trail project. The trail runs through the Pine Mountain Wildlife Management Area, which is managed by the Fish and Wildlife Commission.

Letcher County Judge/Executive Jim Ward said First Lady Jane Beshear is an avid horse enthusiast and that without her help, he isn’t certain the county could have gotten approval for the project from the Kentucky Fish and Wildlife Commission.

“We, the folks of Letcher County, have been working on this for well over two years and it is now becoming a reality,” said Combs. “This is the beginning of a future industry in tourism for Letcher County.”

McIntosh said about 2.5 miles of the 12.5-mile trail has been cleared, halfway to Scuttlehole Gap.

“Most of it is an old trail that is already there and is having to be cleared,” said Ward. “It used to be the old wagon trail that was used to transport goods.”

Ward said the Pioneer Horse Trail, which will end at the Letcher/Harlan county line, should be about eight to 10 feet wide so two horses can ride side by side.

McIntosh said workers will use a small excavator until they get to Scuttlehole Gap, but will have to clear the trail manually for the remainder of the trail.

District Two Magistrate Archie Banks said a chipper is being used on trees and brush that is being cut. Mulch from the chipper will be put back on the trail.

Ward said the court will ask the Department of Fish and Wildlife to determine what kind of grass can be planted along the trail.

Ward said McIntosh has been the driving force behind the trail project, and that he was happy to see the project get underway, not only for the entire county, but for McIntosh as well.

“It’s not just a vision now. We can see it being done,” said Ward. “You should have seen the smile on Jimmy’s face when we cut the first tree.”

Ward said the Pioneer Horse Trail should be ready for public use by the middle of August. Allterrain vehicles will not be permitted on the trail.

First Lady Beshear and Rep. Combs will visit the horse trail on Friday as well as attend the Kids Day celebration at 11 a.m. at the Riverside Park.

“The Pine Mountain trail offers hikers, bikers and horseback riders one of the most scenic views in eastern Kentucky,” said Beshear. “Lt. Gov. Mongiardo and I are working diligently to ensure that Kentucky is the nation’s premier adventure tourism destination, and the Pine Mountain trail will be instrumental in achieving this goal. I look forward to viewing the trail and will continue to advocate for trails throughout eastern Kentucky.”