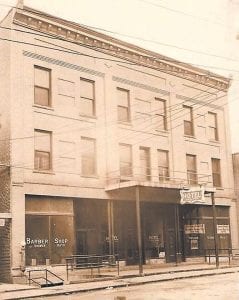 Renovation of the old Daniel Boone Hotel in Whitesburg is expected to begin soon. This week, the Whitesburg City Council hired architect William Richardson to design and oversee a $1 million project that starts with stabilizing the building, seen here in its much earlier days.

Construction is expected to begin this summer on what could become Whitesburg’s first boutique hotel.

Exactly what will be done wasn’t set, but Mayor James Wiley Craft said he hopes that plans can be settled soon and that work can start in July. The city has $1 million in grants, but because of the dilapi- dated condition of the building, Craft said the city wants to negotiate with a contractor.

“We want to know what we can get for our money,” Craft said.

The old Daniel Boone Hotel doesn’t look too much different today than it did when it was built on Whitesburg’s Main Street between 1917 and 1922. (Eagle photo)

Annette Napier of the Kentucky River Area Development District, who is coordinating the grants on the project, told the council that Codell does not have the capacity to do the architectural portion of the project. The motion to hire Richardson included inviting Codell to bid on the construction.

The grants for the project came from the Appalachian Regional Commission.

After being vacant for 17 years, the roof has leaked, causing severe damage throughout the building. Vegetation can be seen growing inside. The construction company is expected to replace the roof, and remove as much of the old, damaged materials as possible with the money available.

Once that is done, the city will either seek more money to do additional work, or look for a company willing to lease and renovate the building into a boutique hotel.

A boutique hotel is defined as a hotel with more than 10, but fewer than 100 rooms with a unique architecture or décor. Many are in historic buildings.

Built in 1919-1920 and opened around the first of July 1920, the Daniel Boone Hotel is a contributing building to the Downtown Whitesburg National Register Historic District, meaning it was built during the period of significance for the district, and has not undergone any changes that substantially changed the character of the building. The hotel is one of the four or five oldest commercial buildings in town.

Before the hotel was built, much of downtown Whitesburg was still farmland, including the property on which the hotel now sits. John A. and Rose Craft sold their farm to George and Mahala Hogg of Roxana in November of 1917 for an undisclosed amount, and the Hoggs sold it to Stephen P. Combs and C.H. Back in March of 1919 for $5,000, with a $3,000 down payment and the balance due in three months. Combs and Back spent nearly $100,000 building the hotel, more than $1.2 million in today’s dollars. They sold it in 1922 to the Daniel Boone Realty Company.

The building continued as a hotel until the late 1970s, when Mountain Comprehensive Health Corporation turned it into a clinic. The county leased it in 1998 and 1999 as a temporary courthouse while the 1964 courthouse was being gutted, stripped, and rebuilt as the modern, stucco-clad building that sits two doors down from the hotel.

Daniel Boone Realty Company owned the building until 2009, when it donated the building to the City of Whitesburg. At the time of the donation, the building had been vacant for 10 years. It was listed as worth $291,000.

The Daniel Boone has 25 guest rooms, all on the top two floors, and a total of about 40,000 square feet, including the first floor lobby, banquet and ballrooms, and the basement.