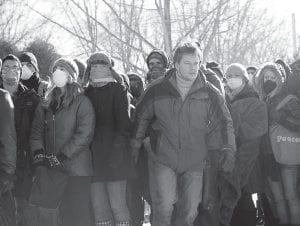 Actor Matt Damon is shown in a scene from the film “Contagion,” the Hollywood thriller that rocketed to the top of the box office through its gripping tale of fictional, global epidemic caused by a new kind of virus. (AP Photo/ Warner Bros. Pictures)

Yes, it could happen. But it’s a stretch.

“ Contagion,” a Hollywood thriller rocketed to No. 1 at the box office through its gripping tale of a fictional global epidemic driven by a new kind of virus. Audiences have gasped in horror at what happens to Gwyneth Paltrow.

Before it was out, the movie made real-life disease investigators anxious, too, though for a different reason: They had worried the filmmakers would take so many artistic liberties with the science that the result would be an incredible movie that was … not credible.

“It’s very plausible,” said Dr. Thomas Frieden, head of the Centers for Disease Control and Prevention, which would investigate such an outbreak.

A new virus jumping from animals to humans? Nothing fictional about that. Global spread of a disease in a few days? In this age of jet travel, absolutely. A societal meltdown if things get bad? Plan on it.

Yikes. The only bit of relief here is that several experts think the odds are pretty long that a new virus could be both so deadly and contagious at the same time.

The team behind the film, which fell to No. 2 on the top box office list this week to the 3-D version of “The Lion King,” used several expert consultants and went to other lengths to get scientific details correct. That included working with esteemed Columbia University epidemiologist Dr. W. Ian Lipkin to create the fictional MEV-1 virus. It’s modeled on the Nipah virus — a dangerous bug first seen in Malaysia a dozen years ago that spread from pigs to farmers.

Efforts also involved actress Kate Winslet sitting down with a female CDC disease investigator so she could correctly copy such things as the investigators clothes, mannerisms and even how the scientist might wear her hair on a field assignment.

Overall health officials say they were very pleased with what resulted. During an advance screening for CDC employees in Atlanta last week, some in the audience laughed appreciatively to see visual details and even lingo that they never imagined would be used in a mass-market motion picture.

“It was very accurate. It kind of made us all chuckle because there were things that we thought only people at CDC might get,” said Laura Gieraltowski, an expert in foodborne illnesses.

Indeed, CDC officials have embraced the film. The agency allowed the movie’s makers to film at their main campus — the first time the agency has allowed a major motion picture studio such access. And CDC officials have opened up their schedules for media interviews, panel appearances and live Internet chats to talk about the movie and potential reallife contagions.

It’s a far better reception than their reaction to “Outbreak,” a popular 1995 movie starring Dustin Hoffman, the last time Hollywood took a major stab at telling a story about a nation-threatening, non-zombie epidemic. Like “Contagion,” that film had a respected director and an all-star cast, but the scientifi c miscues were laughable. Some experts still shake their heads at how much time was spent finding an infected monkey and how little time it took — seemingly just a few minutes — to make, test and distribute a life-saving vaccine.

“Contagion” fares far better in the experts’ eyes. That said, the scenario painted in the new movie is also considered highly unlikely. A thriller telling a complex story in roughly two hours, it portrays some things that are doubtful at best. Among them:

—The government dispatches only one disease investigator to Minnesota to check out the outbreak. In reality, the government would throw a lot more people at an emerging problem like this. When the first two swine flu cases were reported in San Diego in 2009, neither of them fatalities, the CDC sent five such scientists along with other staff.

— The fictional virus kills more than 1 in 5 of the people it infects. That’s extremely high for an epidemic that goes global. The infamous Spanish flu pandemic of 1918-19 — used as the modern-day measuring stick for a terrible international contagion — killed more like 1 in 100. Something this deadly and fast-moving has never materialized, possibly because a bug that kills too efficiently limits its ability to spread because its victims don’t have much time to make contact with many other people.

— When a vaccine is released to the public, distribution of initially limited supplies was decided through a lottery based on date of birth. In reality, health officials would prioritize vaccine for people who were deemed most susceptible to the virus. Also at the head of the line would be health-care workers and others essential to keeping emergency response systems running. The movie didn’t indicate measures like that.

— As a vaccine to protect against the new disease is being developed, the movie seems to suggest that initial human testing of it hinges largely on a CDC scientist injecting herself and then visiting her diseased father’s bedside to see if she gets sick. Officials say a more realistic portrayal would show weeks or months of safety and effectiveness testing in many thousands of volunteers.

Lipkin was involved with the movie for years and even reviewed film clips during production. When an Associated Press reporter reviewed the list of unrealistic points with him, he responded; “It’s a movie.”

One other significant plot point seems pretty implausible, too — how well the epidemic investigation goes.

When new infections start popping up in multiple cities at about the same time, finding the origin can be a nearly impossible task. Yet the movie’s disease detectives zero in on the “index case” very quickly.

“In a real-world investigation, that would be a lucky guess,” said Dr. Douglas Hamilton, who heads the CDC’s Epidemic Intelligence Service.

In their discussions about the movie this week, some CDC officials are making a point of noting that recent budget cuts are threatening their ability and that of state and local health departments to respond as well as the movie portrays. Just one CDC investigator assigned to the scene of a major outbreak?